Bellator welterweight champion Douglas Lima will be moving up to challenge Gegard Mousasi for the vacant middleweight title on May 9 in San Jose.

Just 24 hours after it was announced that he had signed a new contract extension with Bellator, it has been revealed that welterweight champion Douglas Lima will be moving up in weight to face former champion Gegard Mousasi for the now vacant middleweight championship.  The fight will serve as the co-main event at Bellator’s event on May 9 at the SAP Center in San Jose, California.  The news comes just days after it was announced that reigning champion Rafael Lovato Jr. would be vacating the title. Lovato Jr. has been forced to retire indefinitely after being diagnosed with cavernoma.

Since we can’t have a cross-promotional superfight I’ll give you another.

Douglas “The Phenom” Lima (32-7) is coming off a career year after turning in authoritative victories over Andrey Koreshkov, Michael Page, and Rory MacDonald to win the welterweight Grand Prix.  Lima has already recorded wins over the consensus front runners for a title shot at welterweight, Page and Lorenz Larkin, so the prospect of a move up at this juncture makes sense when considering that Mousasi has even previously mentioned trying to move down to challenge him for the title at 170 pounds.

“The Dreamcatcher” Gegard Mousasi (46-7-2) lost the middleweight title to Lovato Jr. last June and bounced back with an impressive performance over former UFC champion Lyoto Machida in September.  After having previously statied that he may retire soon, Mousasi changed his stance in recent months to say he will continue his career at a time when he is arguably the best middleweight in the world.  Mousasi previously defeated Bellator veterans Alexander Shlemenko and Rafael Carvalho (to win the title) and thwarted then welterweight champion Rory MacDonald’s bid to become a two-division champion.

The May 9 card is currently shaping up to be an impressively stacked event with the previously announced fight between double-champion Ryan Bader and Vadim Nemkov for the light-heavyweight championship in the main event. 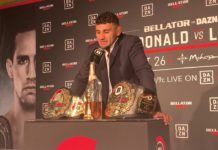 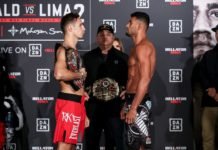