James Krause stepped into his UFC 247 bout with Trevin Giles on 24 hours notice. Up a weight class at middleweight. Having traveled to Houston to coach, not fight.

While he didn’t leave with a win, he did leave a lasting impression with fans. From the outset, Krause threw out the idea that in a sport full of “gangsters,” he was the one making the gangster move. Well, it’s certainly hard to argue against him.

Aside from the lasting impression, Krause also left with an extra $50,000, care of a Fight of the Night award. The bout with Giles, which ended in a split decision, was all over the map. Krause dominated the first round on the ground, with Giles spending most of the frame trapped in a body lock. Somehow, one of the clueless Houston judges (and clueless is being kind) awarded that round to Giles.

The second saw Giles rally back, tagging a tiring Krause (who had zero camp for the fight) numerous times and coming close to a finish. Yet in the third, Krause found another wind, starting fast. They finished still going toe-to-toe, with Giles earning the win, but Krause holding his own. No loser there.

Performance of the Night honors at UFC 247, meanwhile, went to Mario Bautista and Kalinn ‘Khaos’ Williams. Khaos lived up to his name, absolutely swarming Alex Morono, a ten-fight UFC veteran. The TKO came in under 30 seconds for the welterweight. Bantamweight Bautista, meanwhile, set up a TKO finish of Miles Johns with a flying knee.

All four recipients of the UFC 247 bonuses will receive $50,000 for their efforts, on top of show/win money. 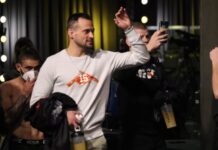