ONE Championship and Invicta FC lead the way in terms of the MMA prospect watch this week.

ONE Championship and Invicta FC both have events going down this Friday, while Usman Nurmagomedov — cousin of UFC lightweight champ Khabib — will be in action this weekend as well.

Don’t let Reinier de Ridder’s stand-up game fool you: nine of his eleven finishes have come by submission. He’s great in the clinch, and Ridder fights well at a distance as he has an excellent jab. When he lets his hands go, he is really accurate. The mat is where Ridder wants to be, as he is an expert jiu-jitsu practitioner — the sort who can time perfect double-leg takedowns. If Ridder is in the clinch, expect him to get the takedown as his hips are excellent and judo tosses are his best weapon. On top, or even on the mat in general, Ridder is the one in control. He is always moving and searching for submissions and that’s why he has eight submission wins. He fights a dangerous opponent in Leandro Ataides (11-3).

Outside of MMA, Andre Petroski is 97-30 in NCAA wrestling and dabbled in kickboxing as well with a 2-0 record. He’s a physical fighter who will muscle guys down with good wrestling but more so with strength. Andre has very strong top position with active ground and pound and underrated grappling. He fights Andre Hall (4-1).

Miranda Maverick is a physical powerhouse, being extremely strong everywhere. In the clinch she is very strong with her wrestling, but she shines even more brightly on the mat. She has a background in jiu-jitsu so she is dangerous on top or bottom, and her ability to shift her hips and attack is perfect. Maverick is definitely someone to watch for this year. She fights Pearl Gonzalez (10-4) who is an excellent challenge. We spoke to Maverick ahead of Invicta FC 39, be sure to check that out.

Josh Harvey has only one fight that went the distance on his record, which came against TUF 27 finalist Joe Giannetti. The fight was scored a draw, but many thought Harvey easily won 29-28. Harvey has spent a lot of his time on the feet and has shown some promise despite being pretty green. He’s better once the fight gets to the mat since his wrestling is better than that of most fighters. He has good timing on his shots, so getting takedowns isn’t usually an issue. He fights Jesse Erickson (9-8).

Cole Ferrell hasn’t been touched in his professional career and has rarely ever been in any kind of trouble. Ferrell has shown glimpses of power in his hands but is a good wrestler with a very solid ground game. He has shown that he has a tight grip when he gets the neck, hence why his seven submission wins that have all come by way of a choke. If there is one knock on Cole Ferrell, it would be that he needs a step up in competition. He fights James Douglas (1-5).

Anvar Chergesov is a dominant wrestler who can wrestle for the duration of three rounds no problem. He has the ability to get takedown after takedown and has solid cardio behind it. The Russian is very strong with not only his wrestling but his ground game as a whole. I personally am not 100% sold on him yet, as I need to see more. He fights Nurullo Aliev (4-0).

Usman Nurmagomedov on the feet is a kickboxer at heart. He doesn’t throw with much power but he’s flashy and diverse with his attacks. He will throw spinning kicks, roundhouse kicks, and question mark kicks. Usman stays unpredictable attacking with all limbs and throws combos with just his legs alone. His wrestling is good, as he is solid at timing double legs and working on top. Simply put, he is a big threat. He’s also a cousin of Khabib, which will keep the spotlight on him. He fights Ruslan Tuyakov (4-0).

Gadzhi Rabadanov is on a five-fight win streak with key wins against Oton Jasse and Steven Siler. He’s an excellent wrestler and durable fighter who can go three rounds no problem. On the feet, he has some power and good leg kicks but looks most at home once on the mat. He has good ground and pound and is a submission threat as well. He fights João Paulo Silva (10-4).

Magomedov has a background in freestyle wrestling and was the Russian National Jiu-Jitsu champion in 2017. The Russian only has six fights, but three finishes, getting it done on the mat with submissions and ground and pound. He’s a smart fighter and could be someone to watch for in the future. He fights Turatbek Kubanychbekov (4-2). 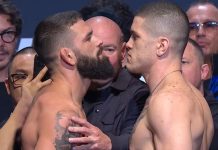 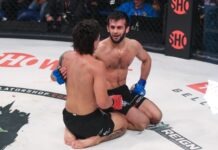 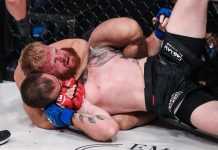