CES, Cage Titans, and Bellator are all in action this weekend, with a number of high-profile prospects between them, including John Gotti III. We’ve got four standouts in this week’s MMA Prospect Report.

John Gotti III is best known as the grandson of the infamous John Gotti, the Italian-American gangster known as the “Teflon Don.” John Gotti the third is going down a different path in MMA and has looked really good so far. 4-0 as a pro, he also went 5-1 as an amateur and combined is on an eight-fight win streak. There is not a lot of footage but Gotti has displayed huge power in his hands from what we have seen. 4-0 as a pro isn’t too shabby, and that’s with four stoppages all in the first round. He fights Marcos Lloreda (7-5).

Mitch Raposo is only 3-0 as a pro but went 6-0 as an amateur. Raposo hasn’t been fighting the best competition but has performed as expected. At only 21-years-old, this youngster has a bright future. His wrestling is all-around excellent from his timing to his execution. Good luck finding a takedown attempt he hasn’t completed. The job he does on the mat is fantastic work as well. Raposo has some dominant grappling and superior cardio. He fights Cleveland McLean (11-8).

The 26-year-old from Hungary has a background in Thai boxing and karate but is more effective on the mat. On the feet, Adam Borics is explosive and has good extension on his strikes. His takedown defense isn’t where it needs to be, but he is excellent at locking up the triangle with three of his five submission wins by a triangle. His last fight, he made waves in knocking out top prospect Aaron Pico (also appearing on the Bellator 238 card) with a flying knee. He will fight former Bellator bantamweight champ, Darrion Caldwell (13-3). It’s a quarterfinal bout in the featherweight grand prix.

Jay Jay Wilson has only been a pro for a little over two years and has been dominant. Wilson has breezed through opponents with four first-round finishes with the longest fight going 1:33. The Kiwi has displayed beautiful jiu-jitsu and showed once he gets the back he has a fantastic rear-naked choke. Still, there is a lot he needs to show but Wilson is someone to watch out for. He fights Mario Navarro (4-5). 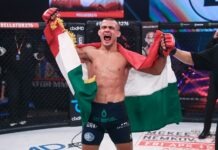 Bellator 276’s Adam Borics: “I Am Ready for the Title Shot”