Las Vegas, NV — In case there was any question, Sodiq Yusuff truly is a blue chip prospect in the UFC’s featherweight division. He underscored that fact at UFC 246 on Saturday, battling to a unanimous decision win against the always dangerous Andre Fili.

Yusuff (11-1) just recently became an American citizen, which gives the Nigerian-born fighter something extra to celebrate following a big win. Of late, he’s been pressing to bring his brothers and sisters over to America to join him.

After this latest win, perhaps he can make it happen. Yusuff spoke of that situation, and reflected on the fight and his rise in the sport while speaking to reporters including Cageside Press backstage at the T-Mobile Arena.

“When they said 29-28, when they said the two round on all judges’ scorecards, I knew it was me for sure,” Yusuff replied when asked whether he had any nerves while the scores were being read.

As for his future in the sport, he plans to use “the same process I’ve had since the Contender Series.”

“I see this thing going on and on and on. I’m twenty-six years old, I’m only getting better,” said Yusuff. “You guys are only starting to see the other aspects of my game. Before this fight, everybody just thought I was a striker. They didn’t think I had any jiu-jitsu. I feel like that’s one of the things that really caught Andre by surprise.”

Word was, Fili expected to come away with the most dominant win of his career against ‘Super’ Sodiq. “I figure he thought he was going to be able to take me down, wrestle and hold me there. But I do have a lot of grappling too.”

Despite Fili apparently dismissing his abilities, Yusuff was complimentary of his foe post-fight. “I’ll say this, he did hit more accurately than most of my past opponents. I saw he was placing his shots. Other fighters will know what I’m talking about, but often when you’re fighting, punches will hit you in weird spots where it’s not really doing much. But each one of Andre’s shots was landing in a solid position. They were hitting me solid in my eye, temple, back of the head. Every single time, it was in a good spot so I will give him that.”

Regardless of Fili’s impressive accuracy, however, Yusuff said he was “confident that I was ahead in the third round. I had a little bit of a problem in that third round, so I had to play a little bit safer.”

Beyond that, despite a few struggles and a step up in competition, it was not what Yusuff would consider his toughest test to date. “Believe it or not, the hardest fight in my career was my second ever amateur fight,” he explained. “Fighting is a lot harder when you have no idea what you’re doing. It’s just two guys out there throwing into the wind for nine minutes. Like I said, I had no idea what I was doing. That was the hardest fight of my career.”

On the subject of what comes next, it’s up in the air. “There’s no one I really have my eyes on right now,” said Yusuff. “Right now, it’s just enjoy this victory, heal up, and go talk to my coaches to see what they’ve got planned up next. I’m sure I should be ranked higher than 15 now. It wouldn’t make sense for me to go lower.” 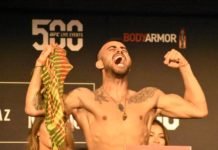