Las Vegas, NV — “Blown away” is how UFC President Dana White described his reaction to Conor McGregor’s performance at UFC 246.

McGregor took all of forty seconds to dismantle Donald “Cowboy” Cerrone in the welterweight main event of the UFC’s first PPV of 2020. Shoulder strikes, a flying knee, a head kick — McGregor appeared to have a renewed focus.

“He looked unbelievable,” White added. “You won’t hear another peep out of me about him fighting at 170.”

White quickly went on the offensive against those who claimed McGregor beat a “can” in Cerrone (spoiler: Cerrone has never been a can). “There’s always critics. There’s always someone that has an opinion,” said White. “People are going to say Cowboy was shot, which is total bullsh*t. Conor McGregor came out, he looked fast, he hit hard, he had a game plan, and he finished a real tough kid that came to win.”

As for how the event did on PPV, without giving any numbers, White suggested that they “Killed it. Killed it. The number that we did on a f*cking streaming service in unbelievable.”

The biggest talking point, not surprisingly, is where McGregor goes from here. His detractors will say to the back of the line; White, unsurprisingly, wants his biggest draw back in the mix.

There’s the Masvidal fight, of course, a fun fight given ‘Gamebred’ holds the “BMF” belt. “There’s always somebody fun that can match-up with Conor,” observed White. “Everybody wants to fight Conor. Everybody’s wanted to fight Conor for the past how many years.”

For White, however, the fight that makes sense is a rematch with Khabib Nurmagomedov.

“Conor was saying, going into the Khabib fight, he had lots of personal stuff. Some stuff self-inflicted, he had injuries, he had all this stuff going on,” White explained. “And he’s been obsessed with getting that rematch, because he knows that he wasn’t a hundred percent right.”

“When you look at this for Khabib, Khabib is 28-0, he’s undefeated, and you start talking about this kid’s legacy,” he continued. “First of all, to be 28-0 in this sport is, I don’t care who you fought, it’s tough to do. Well, this guy’s a world champion. After tonight and with how Khabib won the first time and how famous Khabib has become since that first fight, we’re looking at [Marvin] Hagler-[Tommy] Hearns. We’re looking at [Muhammad] Ali-[George] Foreman. [Muhammad] Ali-[Joe] Frazier. This is a massive fight with global appeal.”

The problem with McGregor-Masvidal, suggested White, is the lack of a title. “Although Conor does want his ‘BMF’ title, but [Masvidal] doesn’t have a world championship,” White noted. “Khabib’s the fight to make.”

Later, White addressed the possibility that Khabib Nurmagomedov not be lightweight champion following his UFC 249 fight with Tony Ferguson. “Conor wants that belt back,” said White. “He’s going to fight whoever wins.”

Justin Gaethje remains the odd man out. White went on to say that he planned to meet with the top lightweight sometime in the next few weeks. 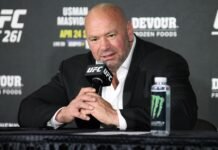