Las Vegas, NV — Conor McGregor had mere minutes to reflect on his return win against Donald Cerrone at UFC 246.

Then, it was on to the usual questions: mainly, what’s next? And who’s next? Yet while UFC President Dana White is drowning in profitable possibilities at the moment, McGregor himself isn’t interested in names.

Speaking with reporters at the UFC 246 post-fight press conference, with Cageside Press and other media outlets packing the room, McGregor touched on the idea of a lightweight title fight. “The lightweight title will be there, right? That will be there,” he stated. “You see the difference in the physique and the preparation and that [for the move to welterweight]. That will come back around, that [title] shot. I’m certainly not going to, if this fight [Khabib vs. Ferguson] does go ahead, sit down and wait and then wait through holidays and injuries and all these types of things that goes with it.”

In other words, as he has said all along, Conor McGregor wants to stay active in 2020.

“The who doesn’t matter for me now. I’m looking at dates now,” McGregor stated. “I know March was there. I’ve got to have a look at a calendar.”

Earlier, McGregor recapped the opening moments of the fight, which saw the Irish star come out guns blazing for his showdown with Cowboy.

“I did come out, and I let that left hand go from the chamber. The force of him dipping and me connecting with my hip even was a shot in itself,” he recalled.

One thing McGregor hopes to put to rest with his performance is talk that all he has is a left hand. He displayed as varied an arsenal as one could in 40 seconds, including some impressive shoulder strikes. No longer, said McGregor, can critics say that all he has is his left hand. “They’ll have to say I’ve just got a left shoulder as well. A left hand and a left shoulder.” The “so-called experts of the game,” he added, were being “highly disrespectful and uneducated” when being so dismissive of his offense. 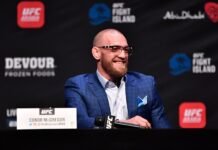