A number of fighters are moving either up or down in weight at this weekend’s UFC 246, making their weight cuts worth taking a closer look at.

Conor McGregor is undoubtedly the most prolific name in the MMA community today. McGregor started his UFC takeover in the featherweight division and was cutting a massive amount of weight. But during that time, McGregor walked around at a much lighter weight than he does today. UFC 246 is special because Conor has essentially said that this is just a hydrated 155lb fight.  McGregor’s weight has always been a hot topic of debate due to his incredibly cardio-taxing fight style, which can suffer if Conor’s weight cutting is not on point. Conor has never missed weight and taking this bout at 170lbs shows just how confident Conor is in his power. This will be Conor’s first fight at 170lbs with an opponent other than Nate Diaz and will also give him more fights in the weight class than at lightweight.

Cowboy is a UFC fan favorite for a reason. The guy will fight any time, any place and anyone. It doesn’t matter what weight class. Way back in the day, 2015 to be exact, Donald challenged for the UFC lightweight belt against Rafael Dos Anjos and was unsuccessful. After that first-round finish loss Cowboy moved up to 170lbs, eliminating his weight cut, and looked darn good even against much larger opponents. Cowboy’s lifestyle and never-back-down from a fight attitude began to be weighed down by the weight cutting aspect of the sport. For a guy like Cowboy, that loves to train and show up for work, the weight cutting aspect of the sport was really draining the fun and enjoyment out of his career. Apparently Cowboy walks around in training camp at about 178lbs so he hardly has any weight to lose at all. Cowboy’s last welterweight fight was Mike Perry back in late 2018 before a 4-fight 2-2 run back down at lightweight.

Raquel Pennington has had trouble on the scale recently in the weight class that she is about to compete in at UFC 246. Rocky missed weight in November of 2018 against Germaine de Randimae coming in at 138lbs for their bantamweight bout. Rocky is 5’7″ and has a 67.5″ reach.

Holly Holm is mostly known for her spectacular knockout of Ronda Rousey but she has truly been a workhorse for the UFC in the heavier women’s divisions.  Holly’s spectacular kickboxing and long frame truly are advantageous to her, especially at 135lbs. However, Holm isn’t exactly big enough for the women at 145lbs in the UFC and all of her performances reflect that, while her performances at 135lbs are a lot more impressive. Hence making the cut down.

Anthony Pettis is a legend in the mixed martial arts world. Pettis has held belts in multiple professional promotions and still fluctuates in competitive weight to this day, as he is constantly trying to improve his performances. This time around, Pettis is fresh off of a stint at 170lbs and is moving back down to 155lbs for this fight. A spectacular KO of “Wonderboy” Thompson and a unanimous decision loss against Nate Diaz were the result of Pettis’ last two bouts up at welterweight.

Maycee Barber, as her nickname hints, is a very young fighter with a bright future within the sport of mixed martial arts. At just 21 years old Maycee’s body is definitely still growing at this point in her career and she has switched weight classes recently to support this fact. Maycee stands at 5’5″ tall and has finished every single one of her opponents in the UFC thus far. Barber is a very explosive fighter that made a smart decision in moving away from excessive weight cutting, trusting completely in her skills.

“Hoe in a Housecoat” — McGregor Blasts Masvidal for UFC 269 Withdrawal, Gamebred Fires Back 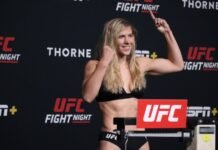 With Maycee Barber Out, Miranda Maverick to Face Erin Blanchfield at UFC 269

UFC: Chandler, McGregor On Board for Future Showdown