Bellator 239 is quickly filling up. On Friday, a report by Sherdog later confirmed by Bellator MMA officials revealed that heavyweights Javy Ayala and Valentin Moldavsky would face off on the card.

Additionally, four other bouts were reported for the event, which takes place at the WinStar World Casino in Thackerville, Oklahoma on February 21, 2020.

Ayala (11-7) has struggled to get back in the cage of late, with a pair of fights against Vitaly Minakov both falling through last year. At Bellator 225, Ayala was pulled by the Connecticut commission for health reasons. The fight was rebooked for Bellator 232, but Minakov was forced out due to visa issues.

That means Ayala missed out on all of 2019, with his last fight a win over Frank Mir in December 2018.

Moldavsky (8-1) has won all three of his bouts in Bellator thus far, after competing for RIZIN earlier in his career.

In a fight that may appeal to MMA history buffs, Lucas Brennan (2-0) — son of UFC alum Chris Brennan — faces Jamese Taylor (0-1). The elder Brennan, now 40, last fought in 2012 under the King of the Cage banner. Once upon a time, however, Brennan competed in the UFC, starting with UFC 16, where he fought twice in a night — defeating Courtney Turner before losing to future welterweight champion Pat Miletich.

The younger Brennan fights at bantamweight, and so far, he has two wins under the Bellator banner, both by submission.

Adil Benjilany (5-2), meanwhile, has been paired up against “The Hard-Hitting Hillbilly” Kevin Croom (20-12). That fight will be contested at featherweight.

Team Alpha Male prospect Chris Gonzalez (3-0) will look to keep his perfect record intact against the much more experienced Aaron McKenzie (7-1-1) in lightweight action. And another top prospect, Jackson-Wink MMA’s Christian Edwards (2-0), makes his first appearance of 2020 against DiMarcco Hutchison (3-2), who previously competed for LFA. Edwards could be a key part of Bellator’s 205lb division in the future. 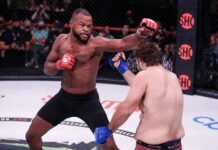 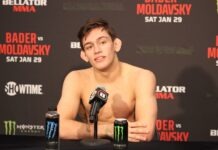 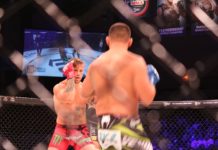