Platinum Mike Perry’s callout of Michael Jai White clearly crossed the line, but there’s been surprisingly little backlash for his use of the N-Word toward the actor.

Just a few days before this writing, “Platinum” Mike Perry once again became the focus of a conversation centered around his odd fascination with using the N-word. Surely some people are offended, but it doesn’t seem to make any difference. In fact, much like his well-publicized use of the racial slur in the past, Perry seems to be garnering more praise from (non-black) fans than disappointment in his lack of cultural awareness. The intentions of this article are not to virtue signal, but rather to initiate a conversation that is long overdue.

In case you are unaware, let us recap. Within the past week or so, Perry got into a Twitter beef with actor and long-time martial artist Michael Jai White. If you want the details, just look at their Twitter feeds. Honestly the whole spat is too boring and infantile to repeat here, but for what it’s worth, it seems as though Mike Perry initiated the conflict. That in itself is commonplace on social media. It is not the argument, but the manner in which Perry escalated the situation that has many black folks, and even some well-known publications like The Source, questioning the UFC fighter’s character. And even though he has yet to receive significant backlash (with a few notable exceptions, including fellow UFC fighter Angela Hill speaking out), there may still be some second and third order effects of Perry’s actions. That’s not good for fans, fighters or media. It’s just a bad look all around. See the photo below for yourself. 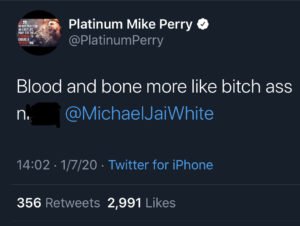 Mike Perry is a colorful personality, always outspoken and usually entertaining — inside the cage and out. That being said, he is often a tad reckless when choosing his words. This is not the first time he has said something along these lines either. There have been several occasions where he exhibited similar behavior. The most notable incident prior to this week was a 2018 video he published in which he glibly declared “I took a DNA test and the results came back… and I was 2% African, so I can legally use the word “N—-“. Truth is stranger than fiction. He actually said this on video and appeared to be utterly serious.

That anyone would make a declaration so silly is beyond absurd. After all, it doesn’t take a mathematician to understand the insignificance of a figure as low as two percent. You can go to Dollar Tree with one dollar and purchase any item in the store; but if you only have two pennies, you may as well rub them together for good luck, because you sure as Hell aren’t able to buy anything.

Quite frankly, use of the N-word is one where everyone should tread lightly, or not at all – if for no other reason than to show respect for an entire race of people word who consider it derogatory and may find it offensive. As of this writing his tweet has almost 3,000 likes, which is insult to injury. This seems problematic, not only because of the influence he holds over fans, but the reciprocity that their adulation gives him. It encourages and validates his shameful behavior, where he should instead be educated on his transgression and held accountable for his actions.

This entire ordeal speaks volumes to the selective judgement about what is acceptable in the UFC and what is not. For example n 2011, UFC Bantamweight and former WEC Champion Miguel Torres tweeted, “If a rape van was called a surprise van more women wouldn’t mind going for rides in them”. A tasteless joke, yes. The N-word? Not even close. Nevertheless, the tweet angered Dana White so much that he promptly cut Torres from the roster. Although he was later reinstated, White seemed to be setting a behavioral standard for others to follow by making an example out of Torres.

So there IS a code of conduct! What is it exactly? Clearly the LGBT community is protected from inflammatory and offensive statements, but there is still no clear explanation as to how it protects black people from being called the N-word by white folks. It seems like a double standard, and inconsistent at best.

As a journalist, we are given a very deliberate set of guidelines along with our credential for each event, entitled “UFC’s Professional Journalism Policy.” Surely the fighters must abide by similar rules of conduct, as it relates to their position, for they are in the public eye far more than the vast majority of MMA journalists.

Though Perry was hostile towards MJW, his intentions do not seem to come from a place of malice or bigotry, nor does this article try to claim that Perry is racist. But that is hardly the point. The real issue, is that Perry’s use of a racial slur, the apathy of the MMA community and the ambiguity of the UFC’s seemingly non-existent professional conduct policy must be called into question.

In today’s climate of so called ‘outrage culture’, where is the outrage?