Boston native Randy Costa is coming off a first round KO at home — we spoke to the promising bantamweight prospect about what’s next.

It is not often that fighters have the ability to fight in their own back yard. Randy Costa, a Taunton, Mass. native did just that and more at UFC Boston back in October. In an arena where he watched his hometown Bruins and Celtics flourish, Costa had the chance to add some more hometown magic to the beloved TD Garden. He certainly did just that.

“UFC Boston exceeded expectations. I remember that just being a pipe dream and now it is a reality” Costa told Cageside Press recently. “I was coming off of a loss, I was at home, I felt ready and that walk out in the Garden was more than special, and so was having my hand raised and hearing that crowd.”

Randy Costa is no stranger to big crowds or the lights being on him. During his time with local Massachusetts promotion Cage Titans his fights would be sell out the venue. The biggest difference is how big that venue had become, with a lot more seats surrounding that cage as he made the walk to the octagon.

“I’ve been fighting at home my whole life during Cage Titans. I know how to fight at home, when some other fighters have a tough time with that” Costa exclaimed. “I separate myself from reality, I isolate myself, I have friends and family in that crowd but I can’t think of that in the lead up. In the cage, I’m in my own world.”

What made this win even more special, besides it being in the TD Garden, was it being his first UFC victory since joining the promotion. An entertaining fight with Brandon Davis a few months prior resulted in his first professional loss. Walking into his fight with Boston Salmon, a rising prospect with the UFC, a win was necessary for Costa, and now with that under his belt in knockout fashion Costa has his eyes on the future.

“I want to be active, I want to be a reliable fighter who will show up for this promotion” Costa told Cageside Press. “I’m ready to fight whenever, I took my time off and I’m ready. I’ve made no secret that I want Sean O’Malley, but anybody with a name throw them my way. I’m eyeing February for a return, if not then I want that UFC 248 card.”

Costa has fought two very tough opponents since joining the UFC ranks, and both fights were entertaining performances. Costa is all about entertaining, and wants a name that can help him put on a show for the fans whenever and wherever that may be.

“Fighting is super important, obviously, but part of this is entertaining too,” Costa explained. “My style inside and outside of the cage is about being myself. I’m an entertaining guy. My fans are nuts, they are some of my best friends and they are the perfect match for my style, a little bit of craziness.”

On that UFC Boston card with Costa was a very important person to the fighter and his career: Joe Lauzon. Lauzon is not only the coach and manager of Randy Costa, but is also a friend and mentor to the young fighter. Lauzon made his return to the UFC and fought to a stoppage victory over Jonathan Pearce at the TD Garden. Costa spoke highly on his mentor as you’d expect.

“Joe is a mentor, a friend, a coach and more to me, It was so special to do that together on the same night,” he said. “Never thought I’d be able to do that, and who knows if that was his last ever? I get to win with him on his last go, how special could that be.”

As for the camp together, Costa believes it was more helpful to have both of them gearing up for a fight, even if it meant Lauzon wouldn’t have his full attention on his protege. The mental battle of camp is always torturous, and having both going through it may have only made them stronger.

“I’m independent, Joe knows that. I always do 110% in camp, Joe knows that, so it made it easier for him to also be training for his fight,” Costa explained. “Mentally, us both going through the cuts and training, it was so helpful for us both to just talk and be there for each other. We were doing hardcore sparring together, everything was together even though our mindsets were on different opponents.”

Costa is one of the more promising prospects in the UFC entering 2020. While standing at a 1-1 record with the promotion, both of his fights were entertaining and “full sends” as the Taunton native puts it. Coming off of a 1st round knockout in his home arena it will be exciting to see what is next for the Massachusetts native.

With UFC 246 around the corner, we ended our discussion with a Randy Costa prediction for the McGregor vs. Cerrone main event.

“I’ve got my boy Cowboy, I’m good friends with Cerrone and he trains with us every now and then, he’s a great dude. I will say though McGregor looks and sounds like he found his hunger again. I always ride the American and I plan on being in the crowd that night for a fun one.” 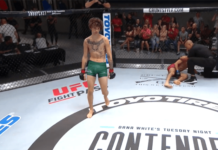 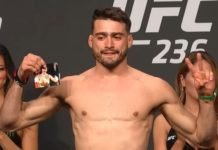 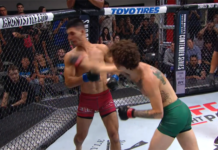