The MMA world tends to slow a little as the holiday season approaches, but a week short on action still has plenty to offer. Up in the big leagues, Bellator has back-to-back cards with a number of prospects, including A.J. McKee, who has a chance to drop the prospect label in the ongoing featherweight grand prix. We’ll break it all down with the latest installment of our Weekly MMA Prospect Report!

Danny Sabatello, only holding a 6-0 record in MMA, does have experience in wrestling as well. He’s a three-time NCAA Championships qualifier and a two-time 141-pound Big Ten Championships place winner. There really isn’t much footage on him, but of what is out there, his pressure and wrestling stand out. He also has a few stoppages on the feet. Sabatello is training with American Top Team, a top-notch camp, to help him along the way. He fights Titan FC champ, Irwin Rivera (8-4).

Mohammed Usman certainly has hype behind him as he is a natural athlete, playing football growing up parallel to being a top wrestler in his high school. Mohammed is the younger brother of UFC welterweight champion Kamaru Usman so athleticism and the talent run in the family. With each fight, he’s getting better and better. Usman is a guy who you don’t want on top of you. While his wrestling struggled in the past he’s gotten better. He’s still raw but has potential. He fights Reggie Cato (5-3).

Joey Davis is an unbeaten D2 wrestler at 133-0. Davis has looked pretty stellar for the most part in his MMA career. He’s used his excellent wrestling and ferocious ground and pound, the latter probably being his best aspect by far. The wrestler though is very athletic and explosive. Davis has finished the fight with both his hands and his kicks. He really looks to be a big deal at only 25-years old. He fights Chris Cisneros (19-10).

Cezary Kesik is very underrated and is one of the best, if not the best, Polish prospects out there. Kesik is exciting, bringing an aggressive kickboxing style with a lot of power in his hands with six finishes by way of KO/TKO. If needed, Kesik will take the fight down where he is really talented with position control and transitions. He fights Jussi Halonen (8-6).

Diego Bianchini brings a Capoeira style on the feet as he throws a lot of switch kicks and spinning kicks. He is very explosive and a human highlight reel as he throws caution to the wind. He has a variety of superman punches, crazy elbows from odd angles, and he is very quick. The Brazilian is also good on the mat. He has slick jiu-jitsu and is dangerous on top or bottom with three submission wins. He fights Vandirson Alves (6-1).

AJ McKee has very good wrestling and is able to land many takedowns in a fight. McKee’s athleticism means he can get the easy double leg or just suplex his opponent to the mat. On top, McKee moves well but his control and top position are what stand out. McKee’s striking is good and still improving, he is strong in the clinch and likes to use knees, and from range he’s started to use more of his kickboxing skills, even getting a head kick KO. McKee is also getting better at keeping his opponent at his preferred range. Even with his ever-improving striking, the mat is where he really shows his high skill level. He fights Derek Campos (20-9).

A product out of Team Nogueira, Juliana Velasquez holds an undefeated record with five finishes. She has a lot of things she needs to work on especially in terms of her stand-up. Velasquez has power in her hands but only throws one strike at a time and really lacks footwork where she just stands in front of her opponents. She has good judo and is at home on the mat where her jiu-jitsu shines. She fights Bruna Ellen (5-2).

Raufeon Stots is a former NCAA Division II national wrestling champion at the University of Nebraska-Kearney. In June of last year, Stots suffered his only loss to current UFC fighter Merab Dvalishvili. Since that loss, Stots has won his next four fights and is one of the best bantamweight prospects today. Stots is a fantastic wrestler but his stand-up has come along nicely. Along with some great movement, he is the total package. He fights Cheyden Leialoha (7-1). Check out our interview with Stots here.

Alexandr Shabily, although violent, is an efficient counter fighter, reacting well to his opponent’s advances. His takedowns generally happen when his opponents try a takedown themselves, but he overpowers and throws them to the mat. On the ground he is very dangerous, winning by armbar, choke, triangle and leg lock, showing his versatility. On the feet, he is calm but he brings the heat when needed, and if he catches his opponent then he will try his best to end the fight, whether that be with his strikes or knees. Shabily is an intelligent fighter that makes very few mistakes. He fights Alexandre Cidade (14-2). 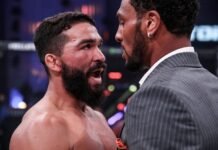