What’s a major event in the MMA world without an upset? UFC 245 had that, in the form of Irene Aldana and Ketlen Vieira.

Ketlen Vieira and Irene Aldana were two bantamweights on the rise heading into UFC 245. Vieira, undefeated as a professional entering her battle with Aldana, was a standout and possible title challenger, depending on how things played out at the Las Vegas event on Saturday. Aldana, 4-1 in her past five, had a chance to play spoiler, and jump the line, if she could come out with the victory.

Vieira vs. Alanda opened up with Irene Aldana on the outside, circling. Ketlen Vieira was showing her aggression and power early. Aldana, however, found her way inside, and halted Vieira in her tracks, at least momentarily. That punch certainly got the Brazilian’s attention. Aldana’s movement was keeping her out of harm’s way, at least outside of her forays in on her opponent. Vieira, meanwhile, was landing often enough that the damage began to show on Aldana.

Then came the inevitable upset that every major MMA card needs to have. While Ketlen Vieira moved in, Irene Aldana unleashed an A-bomb. The Aldana-Bomb bomb landed on the chin, a left that put Vieira down. It was a clean knockout for Mexico’s Aldana, who now jumps into the title picture.

“I’m so grateful for this opportunity,” Aldana told Joe Rogan after the fight. Attributing her success to coaching and hard work, she added that she guesses she’s the number one contender now. Time will tell, and a lot will likely depend on the outcome of Nunes vs. de Randamie later in the night. 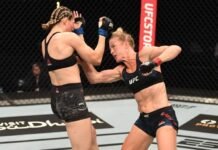