Contender Series winner Punahele Soriano was bummed when his original octagon debut fell through, but heading into UFC 245, he says it worked out for the best.

Piechota is no pushover. In addition to earning gold in Cage Warriors, he’s 2-2 in the UFC, with twice the experience of Soriano.

The Hawaiian, who trains in Las Vegas, is well aware. “This dude is tough man. I looked him up when I found out who I was fighting,” he told Cageside Press at the UFC 245 media day. “He’s good everywhere. He’s got a number of submissions, he’s got a number of knockouts, he’s talented all around. And it’s going to be a fight. I’m looking forward to it.”

His fight week experience has been grand so far. “It feels good. I’m glad to be here. It’s crazy, I’m around all these athletes from top to bottom on this card, and I just feel like I’m feeding off everyone,” said Soriano.

Teammate Jessica Eye is there, also on the card. And fellow Hawaiian Max Holloway of course. “Having Max there, it’s an honor,” Soriano exclaimed. “Before I even thought about fighting, I’ve been watching his fights and seeing how good he is. Just being on the card is amazing, with Max.”

It’s a booking that almost didn’t happen. “I was actually supposed to make my debut for UFC 242, and I’m actually kind of happy [it fell through]. My family can be here now, my girlfriend’s family, and it’s just going to be a good time.”

Soriano’s opponent for that card, Adam Yandiev, was forced out with a knee injury. “Initially I was pretty frustrated because it was like a day or two out from me flying. So I was like ‘at least just wait a few more days until I’m out there, [so] at least I can enjoy Abu Dhabi,'” Soriano quipped. “But being frustrated isn’t going to help me prepare for my future fights and whatnot. It was just a quick switch — back to normal, back to training. No big deal.”

In the end, it all worked out for the best, and Punahele Soriano heads into UFC 245 as the latest Contender Series alum looking to make a big debut in the UFC.

Watch our full UFC 245 interview with Punahele Soriano above! 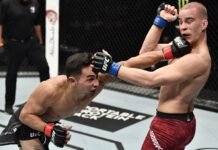