Marina Rodriguez had a great first two rounds, but Cynthia Calvillo dominated the third to earn a draw in the UFC DC co-main event.

Marina Rodriguez signed on to UFC DC on short notice to replace Claudia Gadelha. She stands at 12-0-1 in her career and is on a two-fight win streak. Calvillo missed weight for the bout and is 5-1 in the Octagon.

Calvillo threw a front kick that Rodriguez countered with a combination. Calvillo didn’t seem interested in the takedown early on. Rodriguez kept the pressure on with consistent striking, then turned up the heat with strikes to the body. One of the kicks did damage to Calvillo, and Rodriguez came charging in with knees, but again, Calvillo did not waver. She lived to see another round.

Calvillo drove in for a takedown early in the third round and nearly landed in mount. Rodriguez kept one of Calvillo’s legs clasped, but she countered with a kimura attempt that freed up space. Calvillo landed huge elbows to the body then began working on the head of Rodriguez. Rodriguez was twisting and turning, but Calvillo’s onslaught was brutal. Somehow, Rodriguez hip escaped out of mount by grabbing a leg and pushing Calvillo against the cage. After they separated, Rodriguez threw one more barrage of kicks and knees to close out the fight. 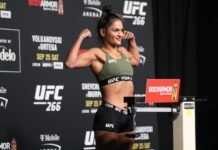