There was a time when Jairzinho Rozenstruik loaded up his PlayStation and entered the cage as Alistair Overeem. On Saturday at UFC DC, he’ll fight against him in real life.

Washington, D.C. — Jairzinho Rozenstruik has helped put Suriname on the MMA map. But while he’s in the spotlight now, years ago, he was busy playing PlayStation games — and even played as Alistair Overeem. The very same man he’ll face off with this weekend in the main event of UFC on ESPN 7 in Washington, D.C.

That’s quite a journey for the heavyweight known as ‘Bigi Boy,’ a moniker that came from his basketball days. Now, Rozenstruik (9-0) goes from the video game world to the real world with ‘The Reem.’

“Sure, I watched Alistair. I used to watch the man growing up, playing with him on Playstation,” the heavyweight told Cageside Press and other media outlets at the UFC DC media day on Thursday. “It’s crazy, now I’m facing him in real life. It’s awesome.”

Aside from Overeem, Rozenstruik mentioned Mike Tyson as his favorite boxer, and Tyrone Spong as his favorite kickboxer.  And he should know: the Suriname native, now training with Hard Knocks 365 in Florida, amassed over 75 wins in the kickboxing world before transitioning to MMA full time.

Rozenstruik feels that if you dropped him in a heavyweight title fight today, he’d have a very good chance of winning. But he’s also been vocal about squaring off with another African fighter, Francis Ngannou. For no reason other than the fireworks that would ensue.

“Winning this Saturday” is the first thing on Rozenstruik’s mind. Then, “fighting Francis Ngannou is next. I think that’s a big challenge.”

“He’s a big scary guy, knocking people out. I do the same. You create a bomb in the octagon,” he continued. “You put me and him [in there], lock the doors, you know what’s going to happen.”

Overeem first, however. And should ‘The Reem’ decide to wrestle, that’s no problem, said Rozenstruik. “No. I’m fit, I’m ready,” he proclaimed. He wouldn’t be disappointed in the least.

“I enjoy all of it. Even this,” he said, gesturing to the media.

It’s easy to see why. UFC on ESPN 7 could very well be a breakout moment for ‘Bigi Boy.’ UFC 244 was a big stage, one on which he pulled off a crushing, quick defeat of ex-champ Andrei Arlovski. Now, his first main event could push him even further in the public eye.

“It’s a chance, a big opportunity. Alistair’s really famous, he’s a legend of the game,” Rozenstruik observed. “He’s been around forever. It’s a good chance. I will make it happen, and make myself into a legend too.”

He’s not starstruck, mind you. “No jitters. Still like him as a fighter. He did his thing back in the day with Brock Lesnar.” Rozenstruik admits he and his friends were in awe of Overeem’s strength back then. “Now I’m facing him in real life. It’s crazy. But in the same way, it’s awesome. It feels good.” 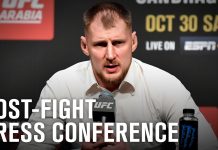