Gaston “Tonga” Reyno will be looking to showcase a year’s work in the gym when he takes on Rey Trujillo on the undercard of Combate Americas: Tito vs Alberto pay-per-view event.

It has been a long wait for the return of Gaston “Tonga” Reyno.  Last year, he had a memorable debut with a first-round stoppage against Carlos Ochoa after being knocked down and put in trouble early.  At the time, things could not have been going more according to plan: he delivered a fantastic performance after being one of the biggest signings for the company in 2018 and it was announced that he would be representing Uruguay months later in the annual Copa Combate.

Unfortunately, things inside the cage would take a turn.  A staph infection removed him from the tournament days out from the event and it will now be more than a year since he’s fought.  While the circumstances of being out of the cage were frustrating, he took a proactive approach to improving his game in what has been one of the longest absences of his career.

“It was a couple things but the important thing is that now I have the opportunity to go.  It was really so frustrating.  I’ve never gone so long without fighting.  I’ve been competing since I was seven years old in Tae-Kwon-Do and competing every month.  My first year as a pro in kickboxing I fought like ten times that year.  When I got to the US and began fighting as an amateur in MMA I still had five fights in a year or four.  Now, I’ve gone a whole year without fighting.  It was driving me crazy but you have to appreciate what you have.  I kept training and getting better, I told myself even though you don’t have a fight you need to get better.  Now, I will showcase all my improvements on December 07.”

While he has not been able to show what he can do inside the cage this year, he has become a fixture in the broadcast booth as a commentator for the promotion and could be seen on location across North America calling fights.  For someone who is passionate about the sport of MMA beyond just himself, the opportunity has been incredible one.

“I really enjoy my position as a commentator.  I’m like you, you have a passion for this sport and me too.  So to be able to talk about it and get paid for it is amazing.  And yes, I get to study the fighters and everything.  When I see people in my division of course it crosses your mind that you may have to fight them.”

In addressing the elephant in the room, Reyno stepped into the role vacated by his teammate Erik “Goyito” Perez who had previously been both a fighter and commentator for the company before parting ways for Bellator this year.  Rather than experience any awkwardness over the circumstances, however, Reyno insists that he took the role with Perez’s complete blessing and that the former UFC veteran continues to support him.

“I’m about to have lunch with Goyito right now. (laughs)  He’s my friend and it has nothing to do with that.  I’m in Combate Americas in big part because of Goyito.  The first event I went to was in Cancun when Marcelo Rojo was fighting in the Copa Combate.  I stayed with Goyito and saw the event with all of the reggaeton in between the fights and everybody is speaking Spanish and I went ‘Man, I want to fight here.’  Nothing against Bellator who always treated me amazing but I wanted to fight here, it is awesome that it was a Latin American organization.  Goyito got me in contact with Combate Americas and I met everybody.  Now it’s ironic since I’m fighting here and Goyito is the one fighting in Bellator.  It has nothing to do with business.  Even when Goyito and Combate were not in the best of terms he would contact me.  I love Goyito and I love Combate too and it has nothing to do with our friendship.  My friendship with him goes further than MMA.  If tomorrow he were to become a mechanic and I became a painter he and I would continue to be friends.  He’s happy for me and he even watches and gives me good advice.”

His role at the desk has also given him the opportunity to keep an eye on the competition as he has been away from the cage.  In particular, he called the championship match between Andres Quintana and Bruno Cannetti in August where Cannetti became the inaugural title holder at 145 pounds.

“I was there cheering for Bruno because he’s Argentinian, I’m Uruguayan we’re like neighbors so I was cheering for him against Quintana.  It was awesome, he had a great game plan to take him down and use ground-and-pound.  He used leg kicks to slow down Quintana who is a great fighter who at any moment can pull something out like he did to Gallito Flores.  It was one where you could not blink.  It was awesome to see him win the title, he is the first world champion in a a major promotion to be from Argentina.  His brother, “Ninja Cannetti” who is in the UFC, is my friend and was there for him.  So to see him and his brother get that and take the title back to Argentina was awesome.”

While he has been out of the cage, it hasn’t stopped the competition from taking aim at him.  In particular, fellow promotional star Jose “Froggy” Estrada has been outspoken about seeking a fight with him.  Rather than take to social media to trade barbs with him publicly, Reyno insists that to engage in a war of words is simply not who he is as a person and that he will wait for the matchmakers to decide who is next.

“I know Froggy and I respect him as a fighter.  He’s an awesome fighter.  But I don’t do that.  It’s a cultural thing maybe, I don’t know.  In America it is normal to call-out people, to disrespect people or something but it is not my way to be.  I fight whoever Combate tells me to.  So he, or Pope Francis, it’s the same for me.  I know so many people want to punch me in the face, even before I began MMA people were calling me out.  I don’t know, maybe it’s a good thing if you’re watching it with an American eye.  But with a Uruguayan eye, you just have to train, get better, be humble, and go do your best.  Like I said, it’s cultural.  If I were to start talking trash to someone, people would be like ‘dude, what are you doing?  Who have you beat?  Go shut up, train, and fight.’ So that’s what I do, shut up, train, get better, enjoy the opportunities I have and never disrespect or talk bad about anybody.”

He will be facing a late replacement in Rey Trujillo on the pay-per-view portion of Combate America’s first foray into pay-per-view.  Reyno in particular in heavily invested in the main event after spending most of the year traveling with Alberto Del Rio as part of the Combate Americas team.

“Alberto all the way.  All respect to Tito, he is a great champion.  But I’m with Alberto, I’ve gotten to know him as a person.  He is an idol of mine and someone that every Latin American martial artist looked up to.  But now I know him even more.  He’s a great father, a great friend, and an awesome professional.  I learn from him every week and have the opportunity to travel to different cities with him.  He’s super humble and talks to everybody, takes time for every fan.  It’s not like he’s asked for one or two pictures, he’s asked for 20 or 30 photos wherever he goes.  The waiters at the restaurant talk to him.  People stop him in the parking lot.  He’s always with a smile like “Si is is.”  He’s awesome and I have him winning this fight.  I’ve never seen him like this before, super focused.  I’m excited to finish my fight fast and then be there I the front row to watch.”

After a year of changes in Combate Americas, Reyno is poised for a big opportunity going into 2020.  The promotion just signed a new broadcast deal with AXS TV to air in English and continues to perform well on Univision in Spanish.  A victory sets him up for a possible shot at the title which would figure to be one of the biggest fights for the promotion in the calendar year.  If it all seems like too much for a fighter who hasn’t even been inside the cage this year, Reyno is prepared to remind everyone why he is must-see television.

“I’m going to die in that cage.  Literally, I’m going to give my all.  I’ve been training so hard.  I can not predict a win.  I hate when fighters do that and say ‘oh I’m going to KO the guy.  I’m going to beat the guy.’ Because anything can happen.  The only thing I can promise you is that I will give my very best and put on a show for you guys.” 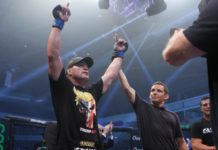