Welterweights Michael Chiesa and Rafael dos Anjos are expected to face off at UFC Raleigh, according to a new report.

Michael Chiesa and Rafael dos Anjos have been lined up to appear at UFC Raleigh this January. The welterweight clash is set to join the likes of Junior Dos Santos vs. Curtis Blaydes and Frankie Edgar vs. Cory Sandhagen on the Fight Night card, expected to air on ESPN+.

ESPN was first to announce the news. Chiesa also confirmed the date Thursday.

31-year-old Chiesa (16-4) will enter the bout on a two-fight win streak, with victories over Carlos Condit and Diego Sanchez at UFC 232 and 239, respectively. Those two fights both came at 170lbs, after Chiesa finally ditched the rough weight cut to lightweight, where he’d lost his last two bouts, and missed weight against Anthony Pettis at UFC 226.

However without depleting himself to make the 155lb limit, Chiesa has looked like a new man. He’ll be getting a step up against a fellow former 155lb’er in Rafael dos Anjos, however. Dos Anjos is a former lightweight champion who has also competed for gold in the welterweight division, losing to Colby Covington with interim gold on the line.

Dos Anjos has struggled of late, going 3-1 in his last four bouts. He’s coming off a loss to Leon Edwards in July, after defeating Kevin Lee at UFC Rochester in May. 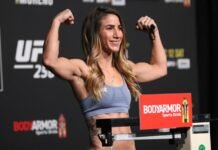 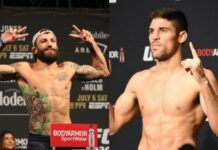