With a number of major shows outside the UFC scheduled to go down this weekend, ONE Championship, Bellator MMA, and KSW lead the pack for top prospects.

ONE Championship returns to the Philippines, while Bellator is back in Thackerville and KSW invades Croatia. There’s a lot of MMA to be found outside the UFC this weekend, and plenty of prospects in action.

Nong Stamp (Stamp Fairtex) is a world kickboxing and Muay Thai champion, with a Muay Thai record of 63-15-5. She hasn’t shown a lot in her MMA career to date, but has finished both her fights pretty easily. She’s shown her kickboxing and Muay Thai skills of course, and although she could throw more volume, she picks her shots well. Stamp in her last fight actually got two takedowns and secured the RNC finish. She fights Bi Nguyen (5-4) this Friday at Masters of Fate.

The 27-year-old is one of the brightest prospects out of the Netherlands, and is riding a six-fight win streak. Steenis has a background in grappling, winning tournaments in Rotterdam. On the feet, Steenis has a good lead jab and heavy leg kicks but is more so a wrestler. His grappling is his best aspect and while he has five submissions, his ground-and-pound is just as good. He fights veteran John Salter (16-4).

Fortune has an accomplished background in wrestling, as an NCAA Division II champion, and a multi-time high school state champion. His stand-up is improving; he has some power and is pretty good in the clinch, but is still pretty green. When Fortune does get the takedown, he’s shown he’s knowledgeable in the top position and possesses some very effective ground and pound, which is one of his best assets. He fights former UFC fighter Azunna Anyanwu (15-5) who is a good test.

Kyle Crutchmer has a background in wrestling with a very successful Division I career at Oklahoma State University. He was a two-time All-American and a two-time Big 12 champion. There isn’t much MMA footage on Kyle, but he has finished three of his four fights. Based on what’s out there on Kyle, he obviously has excellent wrestling. He’s also shown good and active ground-and-pound. He fights CS veteran Antonio Jones (7-3) who should be a solid test of where Crutchmer is at.

The new Bellator signee will make his debut coming off getting snubbed of a UFC contract this Summer on the Contender Series. Anglickas has a strong wrestling base, that being his best weapon for sure. He can wrestle all fight as his cardio has proved to be very good. He also has a dangerous submission attack, holding four submission wins in his career. On the feet, Anglickas bull rushes opponents and beats them up in the clinch.  He’s got a solid work ethic and eventually breaks your will. He fights fellow prospect Jordan Young (11-0).

Young at 6’4″ with a 76.5″ reach knows how to use his length on the feet and on the mat. On the feet, Young is still progressing as he has an excellent jab and starts to double up on his right hand, where he doesn’t have much power but is accurate. Young is dangerous off his back but he does need to tighten up his takedown defense as it’s been an issue before. He fights Julius Anglickas (7-1).

Not much shown on the feet, as Felipe is solely a grappler. All of Felipe’s eleven wins come by the way of submission. His wrestling is a work in progress but he has the aggression necessary to control fights and will to actively work for takedowns. Once he gets going he is on you like glue, giving you zero space to breathe. Felipe is always staying active and working for the submission. He fights Grant Neal (1-0).

Storley is a four-time All American wrestler, who has been dominating in his MMA career thus far. Storley makes takedowns look easy, has heavy pressure and lands big ground and pound where he is the most effective. Storley is a great wrestler, though on the feet he hasn’t shown too much. He has a powerful right hand and does a good job throwing straight punches and has shown solid leg kicks, but can wrestle all fight. He fights EJ Brooks (13-5) who is a sneaky good challenge. Check out our full interview with him ahead of Bellator 233.

Kesik is very underrated and is one of the best, if not the best, Polish prospects out there. Kesik is exciting, bringing an aggressive kickboxing style with a lot of power in his hands with six finishes by way of KO/TKO. If needed, Kesik will take the fight down where he is really talented with position control and transitions. He fights Aleksandar Ilic (12-2) who should put up a good fight.

Dvorak has been dominating the last couple of years as he is currently on a 13-fight win streak. On the feet, he’s dangerous at range with the angles he cuts, always using a large arsenal of attacks with the teep kick being highlighted. He does a great job keeping range with his kicks and footwork but he also cuts his opponents off and explodes in when need be. In the clinch, he is lethal with his knees and elbows. He hasn’t shown much wrestling but has shown solid takedown defense and is a threat if he ends up on top where he has fight-stopping ground-and-pound. He fights Kayck Alencar (10-1) who is a big test of his abilities.

Despite a split-decision loss to Dulani Perry, Martinez has looked very good. He’s a technically sound kickboxer who has some slick hands as well. “Manaboi” fights behind his leg kicks throwing them often and very hard. He has ended a fight with leg kicks but will mix it up as he holds a head kick knockout as well. Martinez hasn’t spent much time on the mat in his pro career but has three arm-bar wins as an amateur. On the feet, though he’s just so good thanks to his speed, counter ability, power, and excellent accuracy and timing. He fights David Rivera (3-0). 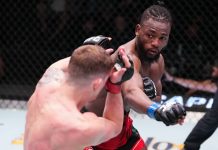 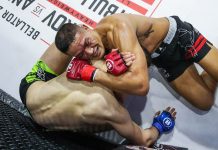