Brendan Loughnane made his PFL debut, Parick Mix returned for Bellator, and tons of other MMA prospects were in action in October.

The PFL was back in action, Bellator had a big weekend in Connecticut, and the regional scene was busy as always. Here’s a look at who stood out in October, as we’re back for another installment of the MMA Prospect Watch.

Making his PFL debut, Loughnane dominated a credible guy in Team Alpha Male’s Matt Wagy. Loughnane started off tactical in round one just with his kicks, mainly some hard leg kicks. He started to pick it up more as the fight went on, using his hands more. He never let Wagy really find his range due to superior range control and footwork. The Englishman picked it up in round three forcing Wagy to curl up, with Loughnane finding home with his right hand.
Grade: B

An excellent performance from the Russian taking out a former UFC fighter and vet, Jesse Ronson, in the first. Both started off trading early and Ronson maybe was getting off the better strikes early. Aleksakhin was throwing a lot more how, up to combinations of two to four strikes. Aleksakhin with his rapid combos was just too fast for Ronson. The finish came as soon as the Russian got the thai clinch to land the knee on the jaw of Ronson. The end came shortly after when the ref saved Ronson.
Grade: B+

O’Neill would make it 3-0 inside the Eternal cage and though the title was on the line (to reclaim) she did miss weight. In round two the biggest moment was when she dropped Motono with straight punches. The fight mainly took place on the mat and it usually started with O’Neill on her back. It was not the takedowns from Motono but the jiu-jitsu of O’Neill that set the pace. From her back, O’Neill used kimuras, triangles, and armbars to transition to the back. Once O’Neill got top position she stuck there with good control and active ground and pound. Only 3-0 so she’s still green but is talented.
Grade: C+

In October, Jack Della would defend his Eternal welterweight title for the second time. Della’s original opponent pulled out and Kevin Jousset would step in on short notice. Jousset would just become another casualty to Della and would become the fourth undefeated fighter he took out. Della made this a gritty fight using short strikes to the body and head in the clinch. He also mixed in some trip takedowns. Della in the second round would curl up Jousset with a left hook to the body and a right to the jaw. His ground and pound was his biggest weapon in the fight using slicing elbows. One of those elbows cut Jousset around the right eye and the doctor called the fight off after the second round.
Grade: B-

What was more impressive than his performance was the fighter Isi Fitikefu beat in Kitt Campbell. Campbell was a top prospect and close to the UFC but Isi dominated him en route to a decision win. Nothing was spectacular about the performance but Isi dominated with top control. Fitikefu at the start of each round took Campbell down with the single leg. At no point did Isi come close to finishing but held position and stayed active enough.
Grade: C

Albaskhanov started off aggressive with a heavy kicking attack. He was taken down pretty early, that being his one downfall. His opponent was Jose Maria Tome, a veteran and former UFC fighter. Tome is very skilled on the mat but Albaskhanov was excellent off his back and kept Tome in his guard. Albaskhanov used a guillotine to reverse to get on top in a beautiful transition. Shortly after he tapped Tome to an arm triangle.
Grade: C+

A battle between two 2019 contender series fighters, Agapova easily beat Marilia Santos. Using her reach, Agapova used a lot of straight strikes and body kicks to keep the distance. Santos, once she got the clinch pulled guard and that was the beginning of the end. Agapova had to fight through an armbar and using her long length she landed some huge unanswered elbows until the ref stepped in.
Grade: B-

Even though Darpinyan was four years the elder of the Russian, Tokov big-brothers him in this fight. Tokov was using foot sweeps and catching kicks to get the fight down where he was very dominant. He was constantly throwing leather in all positions on top as he was heavy but still floating on top. Tokov as soon as he passed to side control got the crucifix position as he had in rounds one and two. Once in that position in round two, Darpinyan was stuck and took a few elbows before the ref stepped in.
Grade: A-

Not much happened before the finish but the evolution of “Black Ice” has been awesome. Davis came into Bellator known as a wrestler but has three highlight-reel finishes on the feet. Being a wrestler his opponent expected him to shoot but it was a flying knee to the face knocking the dude out cold. It was his biggest test to date in a 16-fight veteran in Jeff Peterson but it’s time for some top competition.
Grade: A- 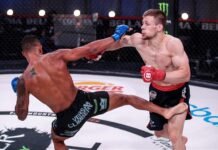