New York, NY — Canada’s Hakeem Dawodu is representing the red and white in New York City at UFC 244. On a three-fight win streak, and coming off a head kick win against Yoshinori Horie in Edmonton over the summer, featherweight Dawodu now has a chance to make a name for himself south of the border. He’s fighting Julio Arce to open the massive NYC card.

Speaking to Cageside Press at the UFC 244 media day, Dawodu reflected on the experience of his first American Fight Week.

“Fight week’s been beautiful. It’s one of the few fight camps where everything’s gone according to plan,” he said. “No injuries, my weight’s perfect, the best weight cut I’ve ever had, and I’m ready to get another bonus.”

No injuries is key, as Dawodu was previously struggling with a shoulder issue. However, that appears to be behind him. “The shoulder’s responded very good. I had six shots of PRP (Platelet-rich plasma). Three in my left, three in my right. Took about three to four weeks to recover. And I’m just basically back at 100%, and when I’m at 100%, that’s what happens.”

Talk north of the border has long swirled around the question of who will become the face of Canadian MMA. In the wake of GSP’s retirement, and Rory MacDonald’s recent defeat to Douglas Lima in Bellator, there’s a void at the top of the heap. While adopted Canadian Max Holloway is one option, Dawodu has been vocal that it’s a spot he wants.

Performing on a big card like UFC 244 might just catapault Dawodu to the front of the pack back home. “It’s very good,” he said of the opportunity. “I’m in the American spotlight right now, I get some American fans, I get some eyes on me. I get to represent my home country. My last three fights were in Canada, now I’m in the States to represent, get some more fans and be more international.”

What Dawodu wants to show off this weekend is simple: “I just want to keep showing off my knockout power and my finishing skills,” he said. “Whether it’s punches or kicks or knees or body shots, I’m planning on putting this guy away, and letting people know I’m a serious contender. After this fight, I want a top ten.” 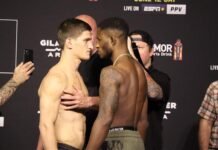 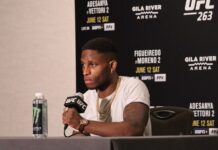 UFC 263: Hakeem Dawodu Says It Hurt His Pride To Pull Out Of Shane Burgos Fight 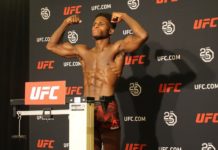