A last-minute finish turned Isaev vs. Goltsov into a memorable affair, with Ali Isaev punching his ticket to the PFL’s million dollar finals.

The final bout of the night at PFL 9 2019 was the second heavyweight semifinal. Undefeated Ali Isaev took on the dangerous Denis Goltsov, in a fight that started slow, but ended with a bang.

Going down at the Mandalay Bay Event Center in Las Vegas, the final match-up started out with a lengthy feeling out period. Goltsov walked Isaev down, but neither men seemed willing to commit past single strikes. Goltsov fired off a leg kick or two. There were a number of feints and jabs falling short. But anyone hoping for a Nicholson vs. Barroso-like firefight was disappointed after the first five minutes.

The second round saw Isaev work to get the fight down, but Goltsov was able to defend. A moment later Isaev did get the fight down, but a sweep by Goltsov put him on top. In side control he looked to trap an arm, but Isaev scrambled and transitioned to top. He wound up in Goltsov’s guard, where he’d stay for the bulk of time remaining in the round. Goltsov would throw up a triangle attempt late, but couldn’t get much going from bottom.

Third round had Isaev circling on the outside in front of the fence. Goltsov opened things with a leg kick. That forced Isaev to switch stances. The pair would engage in something of a chess match in the final round — not a popular approach with fans, who jeered the fighters. With a shot at a million dollars on the line, however, they were not about to be swayed by spectator’s opinions. And then, when it looked like a plodding fight would go to decision, Isaev connected! Goltsov was dropped by a crushing right hand, and Ali Isaev began unleashing bomb after bomb! A second, literally, before the final bell, ref Herb Dean waved it off! 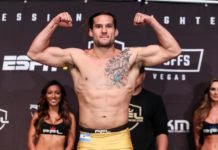