Seeking vengeance for pal Mike Kimbel’s loss, Jornel Lugo knew there was no room for error against John Douma at Bellator 232. But as he put it, ” I don’t make mistakes.”

Uncasville, CT — After starting his career with two straight wins for CES MMA, Jornel Lugo made the jump to Bellator on Saturday night. There was an interesting story line to his debut for Scott Coker’s promotion, as at Bellator 232, Lugo was facing John Douma.

The same John Douma who defeated Lugo’s friend Mike Kimbel earlier this year. So a little bit of vengeance was on the menu Saturday. Ultimately, with Kimbel in his corner, Lugo got the job done, earning a unanimous decision win over Douma.

Breaking down the fight with reporters including Cageside Press backstage after the bout, Lugo said that Douma “was physically stronger than me. I’m not the biggest guy. But I knew the technique was there.”

Asked if he was worried about his opponent’s timing, or skills, Lugo explained that “at this level in the game, it’s not really about technique in particular, it’s more about range, and timing. It’s not about technique.”

“So I wasn’t worried if he took me down,” Lugo continued. “What I was worried about is just the range. I didn’t want to press him too much, and him shoot under me.”

One thing that surprised Lugo at Bellator 232 when it came to Douma: “He was very composed. Most people I fight are not that composed, or as composed as me,” admitted Lugo. “Dude was as composed as me, and I had to check myself, and tell myself ‘whoa, calm down, let’s stay composed, because he wants me to make a mistake.’ You always wait for somebody to make a mistake to finish them. I don’t make mistakes.”

Lugo was also a bit surprised at Douma’s durability. “Dude can take a punch. My hands were hurting. My hands hurt right now. I was hitting him with all kinds of stuff.” 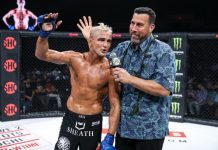 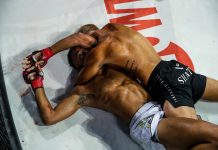 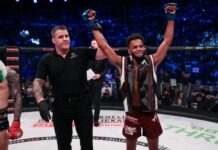