While a big win at home would be a great way for Joe Lauzon to wrap up his career, the lightweight veteran says he’ll stay in the USADA pool for now.

Boston, MA — Prior to Friday’s UFC Boston, the last time Joe Lauzon picked up a win in the octagon was 2017. That was an incredibly close split decision against Marcin Held, one that even Lauzon felt could have gone the other way.

From there, Lauzon embarked on a three-fight losing streak, the last loss coming via a corner stoppage against Chris Gruetzemacher at UFC 223. That was 18 months ago.

Returning as the local favorite in Boston, Lauzon (28–15) still had his doubters. Opponent Jonathan Pearce was coming in from the Contender Series on a five-fight win streak. It was upstart versus veteran, and Lauzon felt like someone who was being used to build up a name.

Instead, he got his hand raised for what could be the last time. “I couldn’t have written it up any better. It went really, really smooth,” he told media outlets including Cageside Press post-fight. “We had a really good camp.”

The difference this time out was very much the camp, said Lauzon. “I think in the past I’ve had fights where I had bad cardio or I wasn’t in shape. Or whatever. A lot of times injuries pop up or things happen in camp,” he explained. “I hate to go and be that guy ‘oh well I hurt my back, I hurt this.’ I keep my mouth shut. You never hear me say anything after I’ve lost a fight, ever. I keep my mouth shut, I get back in the gym.”

As to what the win means to him, it was, without question, an emotional moment. “I was definitely crying a little bit. I was trying to keep it in as best I could. I try not to be all that emotional about stuff. I try to be a little stoic.”

He admitted, however, that “even walking out before the fight, I was looking around at all the people in the green shirts that we printed up at my gym. I was feeling it. There was so much that went into this.”

“Usually you hear ‘oh it’s 8 or 10 weeks I’ve been training really hard,'” Lauzon said during the UFC Boston post-fight press conference. “Literally since April of last year I’ve been thinking of this. I was super unhappy with my last fight. Then since like November,
I’ve literally been in fight camp since last November. I’ve just been crushing it. Just sucking it up, not complaining to anyone, just doing what I’m supposed to do. Just silently going and torturing myself getting ready. And then it finally was here.”

“It was nice that it went so smooth,” he finished.

So is it the last one? Lauzon had been non-committal during Fight Week. The 35-year old remained that way following his win over Pearce, allowing only that “it’s a great way to end it if that’s the end, for sure.”

“We’ll kind of see how things go. I’m always going to be training. Whether it’s I’m cornering, or helping out guys.” Lauzon, of course, has his gym, which continues to grow. So he’ll be in shape regardless.

“Maybe I fight in six months, maybe I fight in a year, maybe I’m done. Who knows,” he continued. “I’ll stay in the USADA pool, I don’t mind, they come banging on my door every once in a while. No big deal. We’ll see what happens.”

If UFC President Dana White has his way, Lauzon may in fact be done. But stranger things have happened in MMA. 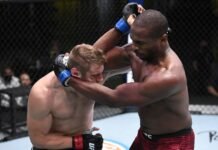