All fighters have made weight for PFL 8 2019, and the second event of the PFL’s post-season is official for Thursday night in Las Vegas.

The second of three Professional Fighters League playoff events this season goes down Thursday night at the Mandalay Bay Event Center. Featherweight and lightweight fighters will throw down for up to two fights in a night to see who advances to the million dollar finale on New Year’s Eve. PFL 8 2019 includes defending champs Lance Palmer and Natan Schulte, plus notables including Rashid Magomedov and Andre Harrison.

On Wednesday, all fighters hit the scales, and when it came time to weigh in, there were no missteps. With a lone exception: Gadzhi Rabadanov was replaced by Alexandre Almeida. That means the card is official. In one of the more interesting twists this season, Ramsey Nijem returns to take on defending champion Natan Schulte at lightweight. Nijem has not fought this year, after getting a walkover in his first fight of the regular season, then missing weight for his second bout this year.

Coincidentally, it was Schulte he was supposed to face at PFL 5 2019 when he missed weight — but Nijem will get a second chance Thursday night.

Weigh-in results and an image gallery can be found below! 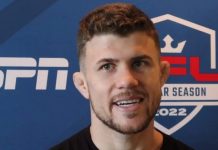