Japanese fans, and those staying up late or getting up early in the west, go an impressive card with RIZIN 19, which saw four finishes to start the promotion’s lightweight grand prix.

RIZIN 19 went down Saturday morning (in the west), and fans of the Japanese MMA promotion were given quite a treat. The launch of the Lightweight Grand Prix saw a number of exciting fights transpire, including Patricky Pitbull vs. Tatsuya Kawajiri. That ended with a flying knee by Brazil’s Pitbull, and some follow-up strikes to seal the deal.

It was far from the only finish Saturday. Osaka fans got to witness finishes in all four of the grand prix quarterfinal bouts. Johnny Case ended Roberto Satoshi Souza’s night in a finishing sequence including a soccer kick. Tofiq Musayev put Damien Brown down with a head kick. Luis Gustavo won via doctor’s stoppage.

In fact only two fights on the entire RIZIN 19 card went to decisions, both kickboxing contests.

The main event between Jiri Prochazka and Fabio Maldonado, meanwhile, ended with Prochazka finishing the Brazilian pugilist in under two minutes. Kai Asakura, making a short turnaround, was also victorious. He walked away with a TKO after Ulka Sasaki suffered a jaw injury in their co-main event fight.

Check below for a gallery of highlights featuring all of the night’s action, courtesy of RIZIN FF. Visit our RIZIN 19 live coverage page for full results. 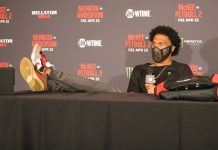 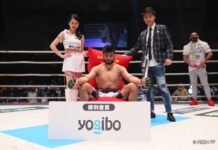