Bantamweights Khalid Taha and Bruno Silva kicked off UFC 243 at the Marvel Stadium in Melbourne, Australia. Taha entered off his first career UFC win, when he knocked out Boston Salmon in just 25-seconds into their fight at UFC 236. Prior to that, the German fighter lost a decision to Nad Narimani in at UFC Hamburg in July.

Silva, who is a main training partner with UFC two-weight champion Henry Cejudo, made his UFC debut Saturday. The “Bulldog” was a contestant on the fourth season of Ultimate Fighter Brazil but was eliminated before the finals. The Brazilian would go on to amass a 3-1-1 record on the regional scene before getting his call up to the premier MMA organization.

Here is how the action went down at UFC 243:

Both fighters took the center of the cage in the orthodox stances but Silva kept switching to southpaw. After about a minute of feeling out, they both engaged and Silva was floored by a huge left hook. He bounced back to his feet and clinched with Taha, pressing him against the cage to clear the cobwebs.

Once they broke, Silva hit Taha with a right hand and followed up with a hard left kick to the body. Taha stepped back in the pocket and landed another power shot that buckled the legs of Silva once again. He couldn’t follow up with anything strong because Silva kicked him in the groin.

Once they broke again, Taha hits Silva with another shot. Silva grabbed the clinch and then kneed Taha in the groin for a second time. When the referee stopped the action, he warned Taha that he would take a point if Silva fouled his opponent once again.

Once the action continued, both landed some clean punches as the round ended.

CageSide Press scored the round 10-9 for Taha.

Taha dropped Silva with a right hand as soon as the action began. Silva shot in for a takedown to try and clear his head but couldn’t take Taha down. Once they break, Silva shot in again and this time was able to dump Taha to his back. Silva got busy with some ground strikes but the German fighter hit him with two up-kicks to the face in response. Silva pressed Taha against the canvas with heavy top pressure. When the German tried a sweep, the Fight Ready team member responded with some hard elbows from the top.

Taha regained the guard but still struggled to get back to his feet. Silva postured up to land some punches and got hit once again with an up kick. They scrambled for position but Silva was able to keep the top position by securing a front cradle. The round ended with Silva remaining on top.

CageSide Press scored the round 10-9 for Silva.

Silva caught a kick and took Taha down, but the German was able to quickly work back to his feet. Silva pressed Taha against the cage trying to take his counterpart down but Taha’s takedown defense remained strong.

When Taha was finally able to disengage from the clinch, he pressed forward with an attack. Silva shot in on a takedown but was sprawled out on and met with some hard elbows and punches. Taha quickly spun behind Silva and blasted him with hard shots. Silva attempted to scramble but ended up getting caught in a head/arm triangle. Taha squeezed hard and forced Silva to tap out — earning a third round submission. 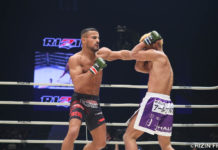