Temecula, CA — Lorenz Larkin (21–7, 1NC) finally got his crack at former Bellator welterweight champ Andrey Koreshkov Friday night. At Bellator 229, the pair battled to a split decision, with Larkin coming away with the W.

The worst part, mentally at least, was “just the waiting process,” explained Larkin. “The longer you’re out of the cage, you don’t really want to have that cage rust and stuff like that. I like to just fight.” And so the hardest thing was waiting, as months and months went by, for a new date. “You’re just stir crazy and focused on getting a date.”

Once he finally got the October showdown with Koreshkov booked, however, Larkin says his coaches put together a great game plan. End result, “after the fight I felt like I could have ran five miles, I was in perfect shape for this fight.”

Larkin looked maybe just a little nervous when the scores were read. Close decisions will do that. However the former UFC and Strikeforce athlete explained that he feels judging in the sport has evolved.

Koreshkov did have his moments, mind you, including a wheel kick that hurt Larkin in the first. “The first round, he caught me, but it was more like a little flash. Worked out of it,” Larkin recalled. “The second round, I wish I had more time. It was a little tweak that we’re going to come back and fix. I was just trying to land big shot, big shot, big shot.” Having been in the game so long, Larkin feels as if he should have picked his shots better — but it’s all part of the learning process. “Fight to fight, I’m always learning.”

Larkin said he could feel the former champ tiring after the first round. “I could see it when he was sitting on the stool. And I was feeling still good. I told them in the second round I was going to push, push, push.” That led to the near stoppage.

What’s next for Lorenz Larkin, should he get his way, it a New Year’s date with RIZIN FF in Japan. “Hopefully in about 30 minutes Scott calls me up and says ‘you know what Lorenz, I’ve been thinking, I’m going to send you to RIZIN and represent for the promotion.’ Scott, I’m a company man, send me! Let me off the leash and send me to RIZIN. Let me represent for Bellator.” 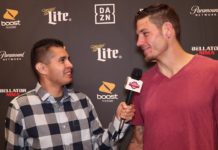