After reviewing an incident that transpired Friday at Bellator: Dublin, Michael Mazzulli, of the Association of Boxing Commissions as well as the Mohegan Sun Commission, has opted not to sanction anyone involved.

Neither referee Dan Miragliotta, who was overheard at Bellator: Dublin calling welterweight star Michael Page a “piece of sh*t,” nor the fighter himself will be fined following the incident. That’s per a new report by MMA Junkie, citing Mohegan commission head and ABC board member Michael Mazzulli, who regulates Bellator’s overseas shows.

Further, the fine Mazzulli had intended to levy against Page’s opponent Richard Kiely following the fight has been dropped, Mazulli revealed. The commissioner’s decision was based on the fact that all parties involved shared responsibility.

The incident involved the deduction of a point by ref Miragliotta from Page for unsportsmanlike conduct. The heated contest saw Page trash talking between punches, while Kiely was down and covering up. The ref not only took a point, but saved Kiely from being finished, standing the fight up. At least for a moment, as he later fell victim to a flying knee.

Kiely was to be fined for giving Page the finger during the fight, until the commissioner changed his mind. However, fighters will be fighters, in the heat of the moment. The bigger concern was a sanctioned official badmouthing an athlete in the cage. Mazzulli confirmed that the incident did happen, but the referee’s comments were not intended for Page’s ears.

“What occurred was Dan was walking away and one of (Page’s) trainers came up,” Mazzulli said (via MMA Junkie). “I’ve already spoken to his trainers afterwards, and we shook hands. Dan is only human, and he didn’t say it directly to Mr. Page, but that did come out of his mouth, I guess.”

Directed at Page or not, that confirmation likely won’t sit well with the fighter, who insisted he would not allow Miragliotta to serve as ref in any future fight involving him without an apology. Mazulli, for his part, seems open to that.

“I will take it into consideration to make sure the fighter is taken care of,” Mazzulli said. “If he doesn’t want Dan Miragliotta in the cage, it only makes sense.” 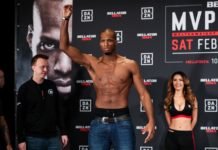