With father Antonio winning earlier in the night, A.J. McKee was motivated heading into his Bellator 228 showdown with Georgi Karakhanyan — and made a huge statement.

All eyes would be on the undefeated A.J. McKee as he entered the featherweight grand prix at Bellator 228, taking on the gritty Georgi Karakhanyan. A showdown between McKee and Patricio Pitbull, who entered the grand prix as champ, had been brewing for over a year.

The young featherweight held up his side of the deal Saturday. Shocking everyone, especially his opponent, McKee dropped Karakhanyan off the opening bell. ‘The Mercenary’ proved why he’s the hottest prospect in MMA at the moment, his left hand planting Georgi on his back. McKee followed it up with a strike or two, but the ref was already on his way in to wave it off.

Eight seconds. All it took was eight seconds for A.J. McKee to advance in the Bellator featherweight grand prix. He may very well be the man to give Pitbull his biggest challenge — dependent on the outcome of Pitbull vs. Archuleta, at least.

The quick knockout was the second-fastest KO in Bellator history, another feather in the cap of the 24-year old fighter, who moved to 15-0 with the win.

“I want my motherf*cking belt,” McKee hollered afterward. “Winner, winner, chicken dinner!” Asked about the next round of the grand prix, Mckee expressed doubt that Pitbull would want to face him. “I don’t think he’s going for that.” 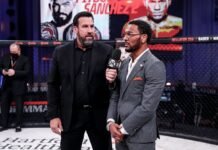