A brief but violent 205lb affair at UFC Copenhagen ended in Ion Cutelaba finishing off Khalil Rountree Jr. with elbows.

A pair of hard-hitting light heavyweights collided on the main card of UFC Copenhagen Saturday night. With the octagon in Denmark for the first time, Ion Cutelaba squared off against Khalil Rountree Jr.

Intense was the easiest way to explain the demeanor between Cutelaba and Rountree. Early, Rountree launched a punishing kick. It landed, but Cutelaba grabbed the leg and put Rountree on his back. Rountree was punching away even while hopping back, trying to stay standing. He would go down, but get back up, and in a clinch, Rountree landed a nasty elbow. Cutelaba would later land a superman punch, then change levels and land a takedown. Followed by a big elbow from the top. Rountree worked back to the fence, but took another elbow in the process. He did get up, but was taken down again. Ion Cutelaba then unloaded with elbows and punches, and under fire, Khalil Rountree Jr. could do little more than cover up.

In the end, the ‘Hulk’ smashed his way to victory with the elbows from the top making the difference. 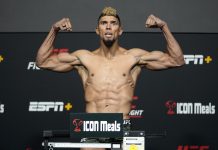 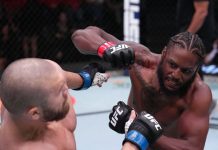