Kai Asakura will make a quick turnaround to headline RIZIN 19, where he will face former UFC fighter Ulka Sasaki.

RIZIN 19 goes down in just a few week’s time, and the card is still taking shape. A medical suspension to Kyoji Horiguchi, and injury to kickboxing sensation Tenshin Nasukawa, created difficulties in the promotion booking a main event, per RIZIN CEO Nobuyuki Sakakibara. Now, the event finally has a headliner, as Kai Asakura, who shocked the world in August by knocking out Horiguchi, has stepped up to top the event, making a quick turnaround against Ulka Sasaki.

The pair were previously scheduled to compete, until an injury to Sasaki scrapped the bout.

Asakura (12-1) has won five straight, including the Horiguchi win, and a victory against RIZIN notable Manel Kape. Sasaki (22-7-2), a UFC veteran, will enter the fight looking to rebound from a loss to Shintaro Ishiwatari.

Also among the latest RIZIN 19 additions, a RISE world champion will compete against a former K-1 title holder. Taiju Shiratori (17-5), who holds the RISE lightweight belt, will battle former K-1 super featherweight champ TAIGA (20-9). That kickboxing bout will be joined by another, which will see Seiki Ueyama (22-11) go up against Taisei Umei (7-6).

The full RIZIN 19 card can be found below. 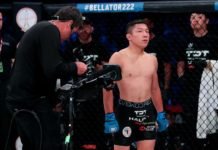