Tyson Nam ran up against Roufusport’s Sergio Pettis at UFC Mexico City, in a fight that played out entirely on the feet.

At long last, veteran mixed martial artist Tyson Nam was in the UFC. A multi-promotion champion on the regional scene who also competed in Elite XC and WSOF, Nam finally made his debut at UFC Mexico City, where he took on the always dangerous Sergio Pettis. The flyweight fight was part of the preliminary card, but the diminutive pair had the potential to do big things, with the 125lb weight class wide open.

Nam entered his promotional debut off a two-fight win streak, while Pettis had lost two straight, most recently at bantamweight against Rob Font.

The opening frame had plenty of feeling out between Pettis and newcomer Nam. Pettis stayed on the outside, utilizing leg kicks. When he did move in, he mixed in high kicks and spinning attacks. Nam looked to cut off the angles, and had a few combinations going, but couldn’t seem to put more together. Things opened up right at the end of the round, Pettis going to the body with a kick, and both men firing. The story early, however, was the jab of Pettis, which may have gave him the edge.

Nam led with his left early in the second, and soon had Pettis backed up to the fence. Pettis circled out, firing his jab. He caught a leg, but Nam pulled away. Pettis continued to mix low and high kicks, but he ate a right hand about two minutes in that he’d need to be wary of. Pettis then fired a knee down the middle, but Nam looked no worse for the wear. A superman punch was countered by Nam next. He then drove Pettis up against the cage momentarily. However, neither man had come close to a takedown. Pettis finished the frame with a cartwheel kick, landing on his back then firing an upkick.

The final frame in Nam vs. Pettis may have had Pettis up two rounds, but it was still a close fight. Judges could easily have given a round to Nam, so it wasn’t necessarily a must-finish situation. Still, Nam had to fight with some urgency, and he opened the round accordingly, pushing forward. However, he ate a Pettis elbow. Nam landed a couple of rights, but Pettis was able to escape, and Pettis soon answered back. Nam landed a crisp combo about two minutes in, but the jab of Pettis continued to be a key factor. In a fight that played out entirely on the feet, that jab was crucial. Nam initiated a clinch again, but once again, could do nothing with it, and Pettis quickly broke free. Later in the round, he’d launch a front kick, as Nam continued to pressure. Ultimately, however, Nam would lose a kickboxing contenst to Roufusport’s Pettis. 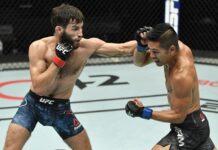