UFC Veteran Albert Morales is hoping a title eliminator at LXF 3 starts him down the comeback trail toward an eventual return to the big show.

Los Angeles, CA — Albert Morales (8–6–1) started his professional career in Bellator MMA, and made a brief stopover in the WSOF before landing in the UFC in 2016. He’d spend a couple of years with the promotion, but needless to say, the stint didn’t go his way.

Making his exit off the back of a three-fight losing streak, Morales has been looking to turn things around. An appearance at the ill-fated Golden Boy MMA show featuring the third fight between Chuck Liddell and Tito Ortiz ended in a submission loss. However, since then, Morales has gone 1-1, and has a big opportunity this weekend at LXF 3.

Taking on Ron Scolesdang, the fight is being billed as a title eliminator. And Morales is chomping at the bit. “Ready to go man. Clock is ticking, days are going down. I’ve prepared for this fight, it’s been a while now,” he told Cageside Press heading into the bout. “My last fight was in May. Decided to take some time off, really wanted to improve myself, the hardware and the software. We did both, we’re ready to go.”

Critics might point to Morales’ record, and either find him undeserving of a title eliminator, or suspect that he was brought in to lose. But Morales answered that by saying that “I think people definitely know who I am. Definitely in Southern California. They know every fight that hasn’t gone my way was either a war, or judges didn’t see it my way. There’s a whole bunch of things that went down.”

“My losses are in the UFC. The majority of them are there,” he added. Those include names like Brett Johns, Thomas Almeida, and Manny Bermudez. “And I don’t really consider them losses. I consider them learning lessons. As long as I don’t stop, I know that I’m going to get to where I need to be.”

Morales has been working with Black House MMA, and has added a recovery session with Synergistic Health. He’s got some new coaches, and remains with Carlson Gracie BJJ. “We’re rewiring my performances, we’re ready to go. That’s all it is. I’m ready to go out there and perform, and get out there and get this W.”

As for Scolesdang (5-3), Morales observed that “he’s a very tough dude. He’s got a few knockouts, he’s been in the game for a very long time. He trains out of a great team, out of Team Oyama in Irvine. There’s a lot of good things to say about him.”

One new wrinkle for Morales: “He’s a southpaw. That’s the biggest challenge that I’m seeing, is that I’ve never fought a southpaw before,” he said. However, “my coach is a southpaw. So what better way to prepare for one than that? There’s a lot of things that I’ve got to worry about with him. He’s a very talented fighter, but I’m out there to go make him look bad. I’m experienced, I’ve been at the highest level of MMA. I’ve fought in the UFC, I’ve fought in Bellator, I’ve fought at World Series of Fighting. I know what it’s like. I know what it feels like to be at the top, and I know what it feels like to lose. And I know which one I like more.”

On how he gets the job done Saturday at LXF 3, Morales answered simply “Violently. I’m going to get the job [done] violently.” 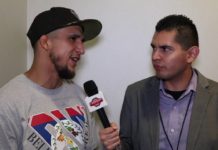 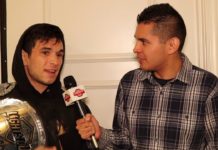 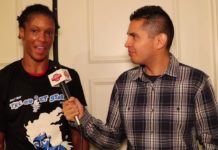