Adam Borics is one of several top prospects throwing down on the Bellator 226 card this weekend. He’s also getting a huge step up, and a spot in the Bellator featherweight grand prix, when he takes on dangerous former two-time champ and two-time tournament winner Pat Curran.

When last we spoke with Hungary’s Borics, he’d called a finish against fellow blue chip prospect Aaron Pico at Bellator 222. It was his second flying knee finish, and as Borics explained ahead of this weekend’s return, “it was definitely my game plan.”

“I knew he was going to take me down because he is one of the best wrestlers in the world,” said Borics, “and I was prepared for that.”

His high flying ways and finishing ability have certainly got Borics some notice. Most of his fights have ended in a stoppage, but he’s not chasing the finish.

“I’m always looking for the finish, of course because I want to always finish my opponents. I have a game plan always, but it can be changed,” Borics told us. “If the situation is not there, it can be changed. I’m not going to rush if I don’t have an opportunity to finish for my fight. I’m not going to do crazy things but if I see the opportunity, I use it — but I don’t rush.”

Fighting Pico at the historic Madison Square Garden didn’t phase Adam Borics, who noted that while he has “more followers and more fans,” outside of that, “everything is the same.”

The growing fan base and extra attention, said Borics, is “I think because before people underestimated me. A lot of people knew me but I think they a little bit underestimated me. They don’t really know me, I’m just 26 years old.” The timing is optimal, as Borics has also become more focused in the gym. “Before I didn’t train professionally, I trained a lot of times alone. In the last two years I’ve grown up and this is just the beginning. I have like eight more years minimum.”

“He has a lot of experience but I am younger and hungrier.”

Now Borics is facing Pat Curran in the featherweight grand prix. Curran is a longtime veteran and former champion. Does that add pressure? Or add to Borics’ motivation?

As for motivation, Borics said that “I am always very motivated.” And, not surprisingly, “I always want to be a better martial artist.”

Training for Bellator 226 and Curran, Borics has been focusing on his development. “I don’t usually care too much about my opponent,” he stated. “Of course, if I for example fight against a wrestler, I try to spar with the guys with a wrestling base and on the last two weeks we focus on the game plan. My game plan is always just like, go there and fight and do what I can do best in my life, fighting.”

Despite Borics’ young age, fighting has been his dream a long time. “When I was 15 years old I was dreaming about this, and I think I am just living my dream now. I can train like a professional fighter so, I think that I am a happy, happy, happy man.”

As for how Bellator 226 and the grand prix bout with Curran plays out, “I try to do my best and I will fight smart and I will get that win, definitely,” said Borics. “He can’t stop me, he is a former champion. He has a lot of experience but I am younger and hungrier.”

Watch Adam Borics take on Pat Curran as part of Bellator 226, live on September 7, 2019 at the SAP Center in San Jose, CA. The main card airs exclusively on DAZN. 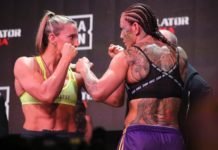 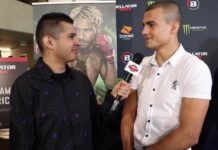