Costello van Steenis will be facing an elite grappler in John Salter when the pair meet in the Bellator 233 main event this November.

Bellator looks like it has a busy autumn planned. The end of October will see a double bill featuring Bellator 231 and 232 in Uncasville, CT, while Bellator 233 is set to take place at the Winstar World Casino and Resort in Thackerville, Oklahoma in early November. In the Bellator 233 main event, middleweights John Salter and Costello van Steenis will collide.

The pairing was announced by the venue on social media Monday.

@BellatorMMA is back. 👊 On November 8, Salter & Van Steenis are going head-to-head at WinStar World Casino and Resort. https://t.co/KFR7lh2eyo pic.twitter.com/m2Kqf2QyWD

Salter (16-4), a former Strikeforce and UFC athlete, is one of the most dangerous grapplers in the middleweight division. An ADCC North American Championships 2017 gold medal winner, the American has won six of his seven fights under the Bellator MMA banner, with his lone loss coming in a title eliminator against Rafael Lovato Jr last September.

Lovato would go on to defeat Gegard Mousasi to claim the Bellator middleweight championship. Salter, meanwhile, submitted Chidi Njokuani at Bellator 210 last November. Notably, he had jumped into the bout on short notice, replacing Melvin Manhoeff. He has not competed since, however. A strong win streak, however, and the possibility of a rematch against Lovato Jr. looms large.

Costello van Steenis (12-1), a Dutch fighter who grew up in Spain, ended up moving to the Netherlands to pursue his MMA career, before signing on with Bellator in 2017. He’s won his first four bouts in the promotion, and will meet Salter on a six fight win streak overall. Aside from an earlier win over Chris Honeycutt, competition for van Steenis has been pedestrian, and Salter will represent his toughest test to date.

Bellator 233 will take place November 8, 2019 and air live on the Paramount Network.  No other fights have been announced for the card as of yet. 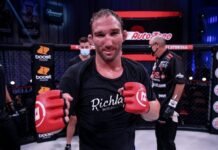 John Salter Not Happy with Early Approach at Bellator 244: “I don’t like to be a guy that gets mount and lays on somebody.”