Proving his struggles against Cheick Kongo earlier this year were an aberration, Vitaly Minakov wasted no time finishing off Timothy Johnson at Bellator 225.

Vitaly Minakov vs. Timothy Johnson was not the co-main event fans expected at Bellator 225. It wasn’t even the fight Minakov expected to be in. However, just hours before the event, news broke that the Connecticut Boxing Commission had recommended Javy Ayala, Minakov’s original opponent, be pulled from the card. Johnson, who had been set to face Azunna Anyanwu, was tapped to replace him.

Minakov entered the bout off the first loss of his professional career, against Cheick Kongo back in February. Kongo, who avenged a 2014 loss to Minakov, landed in a title shot (coming next month) with that win. Minakov needed to rebound, and rebound he did at Bellator 225.

A quick exchange early, and Vitaly Minakov cinched a body lock then muscled Johnson down. As Johnson worked back up, Minakov, still with the body lock, suplexed him, and continued to throw Johnson, anything but a small man, around like a rag doll. A kick to the midsection then caught Johnson, followed by a right jab. The jab stunned big Tim. Timothy Johnson suddenly looked like a wounded duck. Johnson locked up, back to the cage, and Minakov moved in.

One punch, another, with Johnson slumping to the ground, was all it took. The ref moved in to make the much-needed save, and former champ Vitaly Minakov was back in contention at the top of the heavyweight division. 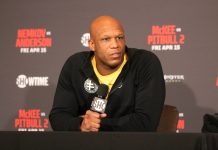