After dropping two straight fights to champ Ilima-Lei Macfarlane and top contender Juliana Velasquez, Alejandra Lara made a statement at Bellator 225 on Saturday against Taylor Turner.

As the fight kicked off, Lara ate a solid punch on the way in, then clinched and used a trip to get Turner to the ground. Lara worked from inside Turner’s guard, landing shots to the body. Turner was active off her back, and Lara was forced to pick her up and shake free of her as Turner attacked a leg. Lara would take her back down soon enough, pinning Turner’s arm with her leg, while Turner’s back was against the fence.

Again, Taylor Turner stayed active, forcing Lara to back off, but she re-engaged, leading with a heavy left hand, and in a scramble, took the back. From there, Lara dropped a number of unanswered punches from to top, with her opponent flattened out. Turner could only cover up, and soon enough the ref waved it off.

With the win, Lara made a definitive statement that she is still a fighter to be reckoned with. Combined with her statement at weigh-ins, urging people to focus on the plight of the rain forest, it’s been quite a week for Alejandra ‘Azul’ Lara. 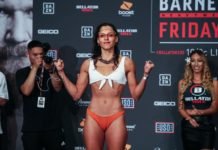