Quite a few notable prospects are fighting this weekend in MMA with some being featured on the main card of Bellator 225 on Saturday.

A former Brazilian National Team wrestler, Cunha is a top heavyweight prospect and is only 26-years-old. Still early in his career, he’s very raw. He kind of reminds you of UFC fighter Juan Adams in terms of style in the sense that he’s a bit sloppy on the feet but once he gets the takedown, he’s in his world. Cunha has stopping ability with big ground-and-pound using his size to stay heavy on top. He still needs a lot of work but is someone to watch for. He fights Henrique Silva (5-1), who hasn’t fought in two years.

Brazil has many good prospects and many very talented ones slip under the cracks. Borralho is very unknown and part of the reason is because footage is hard to find on him. He’s athletic and explosive and of what I’ve seen on him, he’s really dangerous of the feet. He throws everything with bad intentions. He really looks to be a good prospect but just needs to show more. He fights Robson Ferreira (7-3), who is a good test.

A good fighter on the feet, Oliveira mixes in combinations very well between strikes and kicks and has shown power in both. Oliveira looks to be very accurate and the way he cuts the angles to land his combinations is great. He still needs to work on his defense but is a good prospect. He fights Alireza Noei (5-1), who is a good wrestler so it will be a good fight.

Soares was a competitor on the 22nd season of The Ultimate Fighter, where he lost his entry fight to Julian Erosa. Soares is a really talented fighter with stellar skills on the mat. He has solid chokes, winning six times by rear-naked choke. He dominates on the mat, maintaining control when his opponent tries to scramble and generally lives up to his status as a jiu-jitsu black belt. He does need to work on his striking defense, though. He fights Andrew Whitney (16-7), who he should beat.

Sabatello, only holding a 5-0 record in MMA, does have experience in wrestling as well. He’s a three-time NCAA Championships qualifier and a two-time 141-pound Big Ten Championships place winner. There really isn’t much footage on him, but of what I’ve seen, the pressure and wrestling stand out. He also has a few finishes on the feet. Sabatello also is training with American Top Team, a top-notch camp, to help him along the way.

“The Bullet” has a ground game, but on the feet it where he is a fantastic fighter and is why he has made his name known for Combate Americas. He has a lot of experience in amateur boxing and that has shown so much in his MMA career. He does keep his hands low, but it’s allowed his punches to be less telegraphed. He is always throwing constant volume and is incredibly accurate as his style reminds you of Nate Diaz. He fights Bruno Cannetti (8-6), who is a step-down.

Fortune has an accomplished background in wrestling, a Division II champion, and a multi-time high school state champion. His stand-up isn’t bad, as he has some power and is pretty good in the clinch, but he is clearly still pretty green. When Fortune does get the takedown, he’s shown he’s knowledgeable in the top position and possesses some very effective ground and pound, which is one of his best assets. He fights Rudy Schaffroth (6-0), who is a power puncher but his takedown defense is unknown.

In Amosov’s stand-up, he combines his kicks and punches extremely well, he moves in and out fluidly with his punches and uses his reach well too. Yaroslav doesn’t have a lot of knockout power, but he is a finisher, finishing all but four of his wins. Amosov also has very good submission skills with nine submission wins, using his long arms for mostly chokes. He also has excellent takedown defense. He does need to work on his cardio though. He fights David Rickels (21-5), who I think he matches up well with.

Vanderford fought last Summer on the Contender Series in a comeback of the year performance. In the end, he didn’t get the UFC contract but Bellator made the big move and inked him to an exclusive deal. Vanderford is a really strong wrestler as he was an amateur wrestling champion. He has excellent chain wrestling and once on top, he is very dominant. He doesn’t have much on the feet but he is growing and he does hold a lot of power in his hands. He fights Joseph Creer (6-0-1), who is 37-years-old. 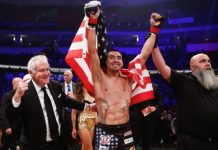 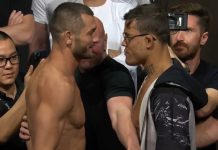