After a tough first three rounds, Stipe Miocic changed his gameplan and scored a fourth-round KO over Daniel Cormier to reclaim his belt at UFC 241.

UFC 241 is headlined by a rematch between Stipe Miocic and heavyweight champion Daniel Cormier. They last fought in July of last year, when Cormier knocked out Miocic in the very first round to capture the heavyweight belt. Since then, Cormier has defended the belt once against Derrick “The Black Beast” Lewis, winning by submission in the second round. Miocic has not fought since then, but was the longest-reigning heavyweight champion in UFC history, defending the belt successfully three times. Cormier, of course, has also defended the light heavyweight title a total of three times and is an Olympic-caliber wrestler.

Stipe Miocic started the contest with a leg kick and Daniel Cormier returned fire. Both fighters traded leg kicks with Cormier really leaning into one. A left hand and an uppercut landed for Cormier, followed by another pair of punches. Cormier was landing at will, then shot for a takedown, lifted up the former champion, waited for the right moment, then slammed him down. After a scramble, Miocic made it to half, then full guard. Cormier postured up and landed a few bombs. Miocic reigned him in, then pushed him off and landed a big upkick. Cormier rolled with it, then began landing heavy shots on Cormier as he shot for a takedown. Miocic kept pushing, but kept getting blasted as the round came to a close.

Cageside Press scored the round 10-9 Cormier

Stipe landed some punches, but Cormier was just too much. He simply walked forward and landed combination after combination. An unnoticed eyepoke bothered Miocic, who got hit by a combo, then answered with heavy punches that connected cleanly. Cormier was pushed against the fence temporarily. After the fighters returned to the center of the Octagon, it seemed like defense was thrown out the window. Both men were blasting each other with shots, throwing caution to the wind. Cormier was getting the better of the exchanges, but Miocic was not out of it yet.

Cageside Press scored the round 10-9 Cormier

Stipe Miocic started the third round by going to the body with a jab and a teep kick. A one-two combo landed for Miocic. Cormier turned it on after a strong first minute by Miocic, landing his combinations after stuffing a takedown. Miocic clinched up with Cormier against the cage to finally pause the action momentarily. The fighters returned to the center and Cormier landed another slick combo, but Miocic closed in and landed a takedown on the wrestler. He couldn’t hold him down for long, but stuffed a takedown that Cormier attempted to respond with. Cormier ate some powerful blows, but continued to stay in Miocic’s face with combinations.

Cageside Press scored the round 10-9 Miocic

Miocic took the center of the Octagon early on, then Cormier came back in with a hook that landed, followed by another. A pair of slick body shots landed for Miocic, then he went high with the same hand and caught Cormier. Miocic started to commit to left hooks to the body and Cormier couldn’t quite figure out how to defend them. The jab from Cormier was still firing, but Stipe kept digging in with left hooks to Cormier’s stomach. Stipe juked out of the way of Cormier, landed another huge body shot that stunned DC followed by a pair of right hands that downed him against the cage. Miocic blasted the champion with follow-up punches and the title was his once again. Unreal.

STIPE KNOCKS OUT DC IN ROUND 4!!!#AndNew! What a fight! #UFC241 pic.twitter.com/ocJIfpRvyj 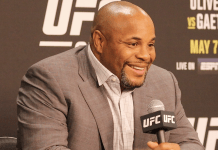 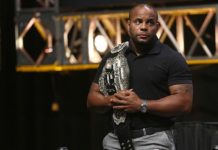