Now 2-1 in the UFC, Hannah Cifers isn’t about to start calling her shots, but she does have one simple request: she’d rather fight stateside, since she’s not fond of flying.

Anaheim, CA — Speak softly but carry a big stick. In fight terms, Hannah Cifers does just that. The diminutive strawweight earned her second straight win in the UFC Saturday night, taking home a unanimous decision against a noticeably improved Jodie Esquibel. The victory at UFC 241 even earned her some mic time with Joe Rogan.

The soft-spoken Cifers seems more nervous about speaking to media than fighting in a cage, though she’s starting to come around. “I’m starting to feel a little better about it. I’m not quite as nervous,” she told media outlets including Cageside Press following the bout at the Honda Center.

Asked about the fight itself, Cifers said that she likes “being somewhat critical of myself, so I always think I can do better. Just more work.” But as to anything specific, she couldn’t put her finger on it. “I’ll have to go back and watch,” she said, reiterating her tendency to be her own worst critic.

The Rogan interview in cage was a first. “Yes sir. It was also really neat to get to meet him in person,” she said of the experience. The first time speaking to Rogan, she said, “was pretty cool.”

Her lack of talking means callouts aren’t about to come flying your way from Hannah Cifers. Her approach, rather, is that “I just want to be competitive with myself, and let my hard work show. And then everything else that comes up, just happens.”

She does have one small request for the UFC, however. “I would kind of like to stay stateside as long as I could, because I don’t really like flying overly much. But I would like to fight before the end of the year if possible, but that’s entirely up to the UFC.”

And if she was asked to fight, in say, South Korea? She’d still be down. “It will be up to them, but still [I would]. It’s all up to them really.”

“I really enjoy the fighting part, and I just try to make sure that I’m enjoying it,” she later added, when mention of her having fun was brought up. “That’s why I like to do it. If it wasn’t for that, it wouldn’t be worth it.”

Cifers, in fact, seemed to be in a good mood all week, snapping photos during Fight Week for the big event. Asked about being around some of the bigger stars on the card, Cifers said that “I want to be able to belong here, but it’s just really cool to be able to be around them, like people I watch and stuff.”

In way of celebration, she added she “might go out of my way and get a large chocolate milkshake this time. Might get a large. I like chocolate, whipped cream is a must.”

You can’t knock the simple things in life. 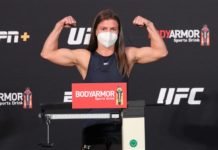 UFC: Hannah Cifers vs. Emily Whitmire Lined Up for Feb. 20