UFC 241 kicked off with a flyweight bout between two fighters making their walk to the Octagon seeking a bounce-back victory. Sabina Mazo suffered her first professional loss in her promotional debut against Maryna Moroz in March, while Shana Dobson was 1-1 in the UFC and coming off a loss against Lauren Mueller. Mazo started her career with six straight victories, defending the LFA flyweight title once. Dobson was 2-1 when she got a shot at The Ultimate Fighter but fell to eventual finalist Roxanne Modafferi on the show.

The card opener was started up with an exchange of kicks, with Mazo getting off far more, and of a greater variety. Almost immediately, Mazo had Dobson hurt with a blow to the body, which led to her backing Dobson up against the cage, scooping her up and planting her on the back. That liver kick would turn out to foreshadow events later in the fight. From guard, Mazo would land punches to the body, then target the head with both punches and elbows. Dobson, however, would scramble free and nearly take the back, only to wind up on bottom once again. Mazo then went to the body repeatedly, and briefly moved to side control before Dobson finally got back to the feet.

Dobson ate a knee for her troubles, however, and was quickly taken back down. Mazon finished the round in mount, easily winning the frame.

In round two, Dobson fired off a big right hand early, and nearly caught a kick in the opening minute. She pursued a takedown, but Mazo initiated a Thai clinch. Dobson would land knees with her back to the fence, but Mazo was in the driver’s seat. Dobson would fire off an elbow after pulling her head free, but soon enough she was planted on her back once again, as Mazo tried to work her way to mount. Instead, Dobson worked back up, again eating a knee in the process. Through two rounds, however, Shana Dobson was outclassed in every department, and would go to the third in need of a finish.

Instead, try as she might, Dobson was unable to turn the tide. She’d unload more offense, firing off some hard strikes, but failing to put together significant combinations. She’d also end up hurt to the body again, backed up eating knee after knee to the head and mid-section. While it looked like she might go out on the feet, Mazo couldn’t quite finish her off, as Dobson used one leg to create a bit of space. Finally, Mazo took her to the ground, with ninety seconds remaining in the third round. Adding knees to the body and punches to the head, Mazo would finish the round out on top, leaving zero question as to the winner. 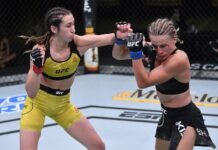 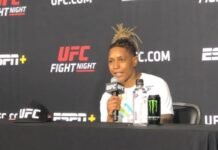