In a fight that could have gone either way, Viktor Nemkov earned another three points toward the PFL post-season at PFL 6 2019.

Viktor Nemkov spent the better part of a decade fighting mostly for M-1 in Russia. However, for the Professional Fighters League’s 2019 season, Nemkov traveled west, earning three points in the opening round of the light heavyweight tournament. At PFL 6 2019 on Thursday in Atlantic City, he took on Rashid Yusupov, who also had three points to his name for the year.

The third to final bout at PFL 6 2019 saw Nemkov connect with a punch early that put Yusupov on his back, with Nemkov jumping on top. Yusupov would survive, but back on the feet, it was Nemkov firing off the harder shots. Still, Yusupov would not be deterred, walking down his opponent, who had his right hand cocked, ready to fire on a moment’s notice.

Starting out in the second, Nemkov was showing damage around the eye. That would get worse as the round progressed. Nemkov, however, would fight through it. And he kept it close enough to stay in it. The latter part of the fight had Nemkov on his back, Yusupov on top, working from guard. Nemkov at times used a closed guard, and looked for an opening for an upkick when his opponent backed off. Yusupov would wade back into guard as the final minute of the fight wore down, while Nemkov looked to make something hhappen from the bottom.

In the end, he did just enough to take it on two scorecards. 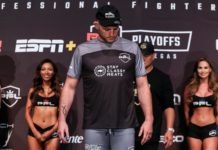