Pam Sorenson and Kaitlin Young were set to throw down Friday in the main event of Invicta FC 36.

Invicta FC returned Friday night with Invicta FC 36, live from the Memorial Hall in Kansas City, Kansas. Up for grabs in the main event, the promotion’s vacant featherweight title, left in limbo after Felicia Spencer made the jump to the UFC. That created a world of opportunity for comeback success story Kaitlin Young, and longtime Invicta fighter Pam Sorenson.

Also on the card, former Bellator MMA flyweight title contender Emily Ducote, who was dropping to to strawweight to fight Janaisa Morandin. Plus another interesting pairing in Lindsey VanZandt and Jessica Delboni. VanZandt was most recently seen over in Bellator as well, where she defeated RIZIN’s Rena Kubota at Bellator 222. It was back to her native atomweight division at Invicta FC 36 on Friday, however.

Check below come fight time for full results and a recap of the action from Invicta FC 36!

A back and forth first round, Young appeared to be better in the striking department, landing a couple of nice combinations in the first five minutes. However, Sorenson was clearly the better grappler in the first frame, getting two takedowns and getting Young’s back on both. However,  the second time around Young would spin out of the choke attempt, and throw an illegal knee as Sorenson was a downed fighter. The fighter would deduct a point for this, a somewhat surprising decision.

An interesting second round, Sorenson would take the fight to the ground almost immediately. Getting a blast double leg to slam Young down, she got the back almost instantly. She would follow up by looking for the choke and looked like she almost had it at points. However, Young would reverse position and end up on top. Following a standup, Sorenson was desperately looking for a takedown but couldn’t get it. An interesting
second round.

Round three would closely resemble round two. Sorenson would get the takedown and get Young’s back quickly. However, Young would reverse, and end up in full guard. Sorenson would try for an armbar before Young would stand up and bring the fight back to the feet. There, Young would have some success. However in the final minute, Sorenson landed a great flurry that may have stole her the round, while Young did fire back, it was a great moment for Sorenson.

Round four showcased some nice grappling by Young as opposed to Sorenson for a change. Despite being taken down and briefly being in trouble again, Young would turn the tables. Taking Sorenson’s back briefly, and then looking for an arm-triangle choke, she had some good success on the ground. However, Sorenson would again escape and take the fight to the feet, where Young would land a nice combination in the clinch prior to a takedown by
Sorenson to close out the round.

The last round was all Sorenson. Taking the back, Young had to fight off submissions all round. She never had a chance to breathe, and it didn’t help Young’s chance to win. Sorenson would go on to earn the championship, in a wide decision victory.

A back and forth fight early between former title contenders, got finished quick by Emily Ducote.  Morandin kept throwing those kicks to the body and legs, and Ducote picked up on
it. Ducote countered with a clean right straight and dropped Morandin. She would follow up with some ground and pound to finish the Brazilian. What a debut, and what a knockout win for the Oklahoman, Emily Ducote.

Jessica Delboni was the much shorter fighter against the bigger, grappling heavy VanZandt. Despite this, Delboni welcomed the grappling, taking the fight to the ground on her own on many occasions. However when on the ground, VanZandt seemed to control to an extent, throwing up many submission attempts off her back. However, it wouldn’t be enough, as Delboni used her heavy top pressure to land shots, and do more work on the feet
whenever the fight went there. Good win for Delboni, as she hands Vanzandt the second loss of her young career.

A clear fight of the night frontrunner, Stephanie Geltmacher, and Victoria Leonardo put on a show for the Kansas crowd. Leonardo was much bigger and used that to her advantage. Using her strength in the clinch, and her jab to keep Geltmacher at bay, she brawled too. Geltmacher thrived in these situations, taking the fight to the taller Leonardo, both fighters got bloodied up and put on a show for the fans as they threw caution to the wind. A great fight, that may be ruined by the post-fight aftermath. As the fight was originally announced for Geltmacher, the commission reversed the decision after they realized they added the scores wrong. Still an incredible fight.

The entire fight was dominated and dictated by Anderson’s grappling. Saull showed heart, but she couldn’t do anything to keep Anderson off of her. The first round the fight nearly came to a close via a rear-naked-choke as Anderson quickly got the back, and while Saull would fight it off, it was a sign of things to come. Anderson dominated with her top pressure for the majority of the fight. While a split decision, it doesn’t show how dominant Anderson was, as she took the win.

Chantel Coates was looking to follow up her record-fast knockout her last time out, with another win. For almost two rounds it looked like that would be the case, landing hard and fast counters, she was controlling the standup in an entire standup fight. However about halfway through round two, Sammons forced Coates into the fence and got the takedown. She would follow up with getting the back and quickly getting the submission. What a comeback win by Sammons.

The crowd was on their feet for this one, Harpe attempted to use her grappling in this one. Taking Norton down in rounds one and three, she used dominating top pressure to keep Norton her back. However round two was clearly Norton’s landing many good combinations, and stopping Harpe’s takedown attempts, she took round two with her striking. However, it wasn’t enough, as she would go on to lose via split-decision.

Ottolino’s leg kicks were the story of the fight. Despite Cawley landing some clean shots, including a left hook in the second that nearly dropped Ottolino, it wasn’t enough. Ottolino landed many brutal combinations, many in the third that almost closed the fight. A good win for the debuting Texan Ottolino. 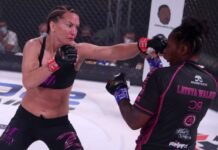 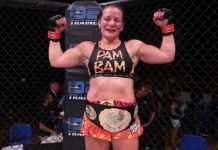 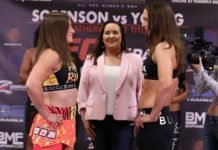 Bellator 256: Ryan Bader Aims To Get Back Nemkov or Anthony Johnson Loss in...