Following a first round submission on last night’s edition of Dana White’s Contender Series, Herbert Burns has joined brother Gilbert in the UFC.

Las Vegas, NV — With a submission victory over Darrick Minner in the very first round on this week’s edition of Dana White’s Contender Series, Herbert Burns ensured that he’d be part of the next sibling duo in the UFC.

Brother Gilbert, after all, has already found success in the octagon. With Herbert joining the party, the pair are now among the likes of the Nogueira brothers, Miller brothers, and Diaz brothers. And let’s not forget the Shevchenko sisters.

“I feel amazing now. Finally the world’s coming off my shoulders, after the fight. I got the finish, but you never know, you still have doubts in your head,” Burns said after the fight.

Burns hadn’t spoken to his brother when he fielded questions from reporters including Cageside Press backstage at the UFC Apex. “Not yet. My phone is dying.” Someone get the man a spare charger.

“It was a lot of sacrifice for me. It was my whole life,” he said of the effort getting to this point. That included time away from his daughter. “Everything I did was for her. We made it.”

“The Burns brothers. It’s a family business now,” he added. Soon enough, it will be.

On the fight itself, he recognized the threat Minner posed early. “He came swinging crazy, I expected nothing different from him.” And while some people may have batted an eye when he pulled guard, “I know my ground, I know my jiu-jitsu’s another level from most people on the roster,” said Burns.

“I knew he has a good guillotine, I tried the triangle before, he couldn’t posture up,” he recalled. “I’m like, ‘I know, I know what his defense is, next time if he try.’ When he tried the guillotine, I moved, I saw he was just going to throw the elbow, got the triangle, and finished with the arm-bar.”

“Everything worked out in the end,” he added. Later, he reiterated the danger Minner posed out of the gate. “I knew, in the first round of his fights, he comes super strong, he comes wild. I knew that was his strength.”

So Burns anticipated “this guy would come crazy swinging. So I’m like ‘I’ll throw the knees.’ He kind of felt one of the knees. I knew he was too crazy, I was like ‘I don’t want to deal with this craziness.’ Just pulled guard, worked my jiu-jitsu. He tried ground n’ pound. One elbow landed on my head, the other one I managed to prevent. He missed most of that.”

The finish, however, was just a matter of time in Burns’ eyes. Now, it’s on to the UFC. 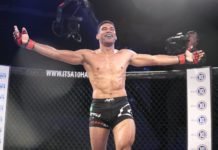 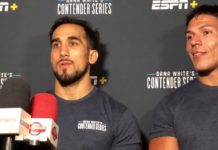