Valentina and Antonina Shevchenko. Jim and Dan Miller. Nick and Nate Diaz. Minotauro and Minotouro. Siblings gracing the octagon are a rare occurrence, but Herbert Burns had a chance to join brother Gilbert in the UFC with a strong showing at week seven of Dana White’s Contender Series Season 3.

Featherweight Burns was set to be taking on Darrick Minner, and when it comes to quality of competition, he had the edge. Burns (8-2) spent a good chunk of his career with ONE Championship, where he earned wins over Edward Kelly, ex-champ Honorio Banario, and Timofey Nastyukhin, who knocked out former UFC champ Eddie Alvarez earlier this year.

Opponent Darrick Minner boasted far more fights on his record, mind you. At 22-9, he’d certainly put in the time.

Also on the card, Lucrezia Ria, an Italian fighter matched up with Brazil’s Marilia Santos. And in the main event, Omar Morales would take on recently crowned LFA lightweight champ Harvey Park.

Check back come fight time, 8PM ET, for full results from this week’s Contender Series outing. For a closer look at tonight’s fights, check out our full breakdown and preview article.

Omar Morales def. Harvey Park via TKO (Strikes) at 1:06 of Round Two

Lucrezia Ria def. Marilia Santos via Split Decision at the end of Round Three

Herbert Burns def. Darrick Minner via Submission (Armbar) at 2:29 of Round One

Andre Muniz def. Taylor Johnson via Submission (Rear Naked Choke) at 1:46 of Round One

Dwight Joseph def. Jay Perrin via Unanimous Decision (29-28 x 3) at the end of Round Three 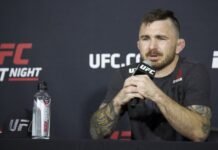 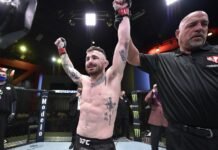