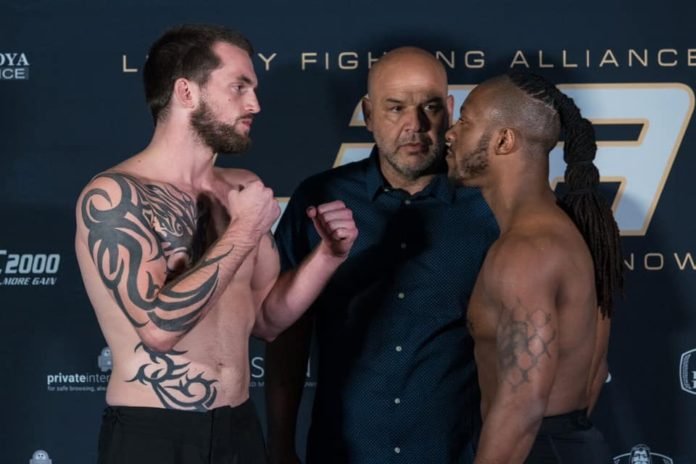 LFA 73: Lingo vs. Hatley Jr was live from The Bomb Factory from Dallas, Texas and was broadcasted live on AXS TV.

In the new main event, Austin Lingo faced Solo Hatley Jr in a featherweight contest. Originally the main event was supposed to be Levi Mowles vs. Adrian Yanez 2, but Mowles missed weight by over five pounds.

Lingo (6-0) is a Fortis MMA product who has a 5-0 record in LFA, with three of those wins being first-round stoppages. Most recently, Lingo needed 25-seconds to submit Angel Luis Cruz on the very first round at LFA 62.

Hatley Jr (6-1) is also on a six-fight win streak. Since losing his professional debut in 2017, the 22-year-old has won every fight since, with four stoppages along the way. Most recently, Hatley Jr knocked out TeeJay Britton in his LFA debut just two minutes into the first round at LFA 67.

In the co-main event, Hailey Cowan faced Bellator veteran Jessica Middleton. Cowan entered the contest winning three-straight bouts – all via stoppage. The 27-year-old has never seen a third round. Cowan has had all of her professional bouts in LFA. Middleton on the other hand, is making her LFA debut. The five-time Bellator veteran has fought tough competition like Bruna Allen, Emily Ducote and current flyweight champion Ilima-Lei Macfarlane.

Also on the card, Myles Johns’ brother Elijah returned to the LFA cage and Kyle Estrada looked to score back-to-back wins in LFA.