Max Holloway defended his featherweight championship against Frankie Edgar in the main event of UFC 240.

Max Holloway was back at featherweight at UFC 240, taking on one of the few remaining contenders in the promotion’s featherweight division in Frankie Edgar. Edgar himself, a former lightweight champion, was looking at his third crack at 145lb gold, after failed title bids in 2013 and 2016 (for an interim belt), both times against Jose Aldo.

It was a fight the promotion had tried and failed, to put on twice previously. At UFC 218, Edgar was forced out due to injury. In turn, Holloway wound up off the card at UFC 222. Edgar would go on to face Brian Ortega, only to be knocked out for the first time in his career.

Edgar bounced back against Cub Swanson at UFC Atlantic City last April but had been out since. Still, Edgar might have represented the final foe among the “old guard” at featherweight that Holloway had yet to dispose of.

Edgar opened up the fight with some leg kicks, while Holloway attempted to work the jab. Both men were struggling to find the distance, but Edgar seemed to be landing the better shots through the first five minutes. Max landed a hard right hand, then a left to the body. Holloway was getting busy to end the round, but Edgar was right there and landed a good right hand. Holloway landed a clean uppercut, which snaped Edgar’s head back. Edgar followed with a leg kick, and Holloway went for a head kick. The round then came to a close.

In round two, Max landed a right hand, then followed by a jab and an uppercut. Max was starting to find the range, Edgar shot for the takedown but Holloway shook free. Holloway landed a good left hand, as the blood started to flow from Edgar’s nose. Edgar looked to shoot momentarily, but Holloway landed a flush right hand. Holloway looked very sharp in round two, stuffing Edgar’s takedown and landing a lot of clean shots on the shorter Edgar. Holloway ended the round by throwing a beautiful spinning back kick that nearly knocked Edgar off his feet.

Edgar looked for a takedown at the start of the third round, but couldn’t get it. Holloway continued to pump the jab, landing some great shots on the outside. Edgar countered with a leg kick, then right hand. Edgar tried to land some spinning strikes, but none were really landing. Edgar shot for a takedown, but couldn’t get it and ate a left hand. Holloway then rocked Edgar with a combination, and as he moved in, Edgar got the first takedown of the fight. Holloway would return to his feet as the round came to a close.

Championship rounds commenced. Frankie landed a good right hand, despite the blood flowing now. Max’s jab continued to be on point, as Edgar shot for the takedown but couldn’t get it. Edgar shot again and drove Holloway back into the fence. Couldn’t convert, and Max landed a good right hand not long after. Max looked for a head kick but Edgar just ducked out of the way. Max seemed to hurt Edgar with a couple of right hands, but Edgar grabbed onto a single leg and tried to survive. He would survive and see the fifth round.

Edgar shot for a takedown to start the final round but couldn’t get it. Both men utilized their jabs very well, but Holloway was landing the cleaner shots. Edgar shot for another takedown but was once again stuffed by Holloway. Holloway landed a nice right hand, followed by a shot to the body. Max looked very sharp in the fifth round, as Edgar became even more bloodied. Holloway landed a spinning back kick, which was countered into a takedown attempt by Edgar. Edgar couldn’t get it, and the fifth and final round came to a close.

It wasn’t a flashy performance, but it got the job done. Max Holloway adds Frankie Edgar to his already incredible resume of wins. 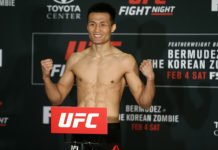 UFC Busan: Can Frankie Edgar Survive the Attack of the Korean Zombie? 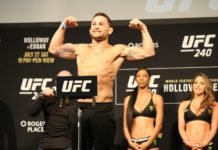