While athletes in MMA are technically prize fighters, UFC 240 lightweight Arman Tsarukyan said Thursday that he’d rather win than get paid.

Sure, Khabib Nurmagomedov wrested a bear once. Is Arman training with tigers?

Not quite. The Russian fighter, who appears at UFC 240 this weekend, “was at the zoo,” he explained via translator to Cageside Press on Thursday. “It was just the position that the tiger was in. He was thinking, ‘when a person’s like that, you’ve got to finish.'”

A joke, obviously. Tsarukyan’s skills are no joke, however. He earned a Fight of the Night in his UFC debut, despite coming out on the wrong side of the decision. That was back at UFC St. Peterburg in April, against fellow Russian Islam Makhachev.

The post-fight bonus, however, only goes so far. In fact, Tsarukyan (13-2) would rather have the win than the cash. “The money doesn’t replace the victory. They even possibly could have not paid [me] for the fight — but the victory would have been more important than that. There’s no victory, that’s all irrelevant.”

At UFC 240, Arman Tsarukyan will face Canada’s own Olivier Aubin-Mercier. ‘The Canadian Gangster’ is coming off the first losing streak of his career. Tsarukyan, however, will not be taking him lightly.

“First off, I’ll just say that I don’t underestimate him. But in terms of finding some kind of specific point, I think he’s good everywhere,” the Russian fighter said. “The fact that he’s a mixed fighter, he’s wrestling, striking, everything altogether.”

Plus, “the fact that he has eleven UFC fights, [I’m] not going to underestimate him. Take him seriously.” Fighting in enemy territory, however, is not a concern. “There’s only one cage, so it’s no problem,” Tsarukyan said. “There’s not much crazy pressure on [me], because it doesn’t really matter. [I’m] mentally and physically prepared 100%, so that won’t play a factor.”

And while travel can sometimes impact weight cuts, Tsarukyan has it under control, he said Thursday. “There’s like little things of course, but the fact that we come here a week out gives us time to prepare and do everything the right way. We’re going to do things professionally and take care of it.”

The lightweight has been training with American Top Team, one of the biggest names in the sport. “The biggest thing for [me] at ATT was the fact that [I] was able to be around so many stars.” That includes both the UFC, and other organizations. Which in turn gave him the ability to test himself, to see where he belongs and “where he stands in the UFC.”

As for UFC 240, Tsarukyan’s prediction is that it will go the distance. “A hard three round fight.” 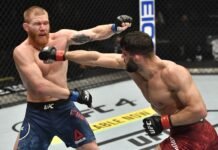 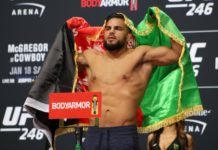