Canada’s Jeremy Kennedy got back in the win column at PFL 5 2019 in Atlantic City, NJ on Thursday, at the expense of Steven Siler.

Former UFC fighters Jeremy Kennedy and Steven Siler threw down at PFL 5 2019 on Thursday night. The second of three shows from Atlantic City, NJ, the pair were looking for a spot in the PFL post-season, and both fighters started the night on the outside, looking in with zero points.

That was a considerable fall for Siler, who went deep into the post-season in the PFL’s 2018 campaign.

Kennedy worked his jab in the opening round, and both men found some success on the feet. A relatively close round was punctuated by a Kennedy shot in the final minute, taking Siler to the ground, looking to steal a point on the judge’s scorecards. Kennedy, however, was not able to do much while on top, as Siler initially tied him up, then gradually got more active from bottom as the round wore down.

Early in the second, the pair exchanged lefts. Kennedy’s left hand was sharp, but Siler was able to catch his opponent with a left of his own. However, Kennedy’s movement was looking slick. At least until Siler was able to back him up to the fence and unload a flurry of strikes. Escaping, they’d move back to center, and continue trading. Siler’s corner urged him to draw Kennedy into firing first, so Siler could counter. They’d remain on the feet to the buzzer this time.

That extra point was looming large heading into the third, with a number of featherweights sitting at 3 points in the standings. In the final frame, Kennedy would take the back, and earn a takedown, within the opening two minutes — only for Siler to reverse pretty much as they were going down. Kennedy, however, was quickly back to his feet, as was Siler. Kennedy would secure another takedown with a solid two minutes remaining, giving himself plenty of time to work. All that control time sealed the deal for Kennedy in the end. 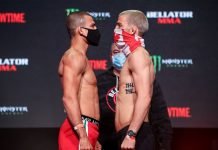 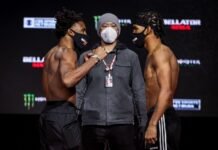